For fall, the designer Yoshio Kubo created what he described as "a joint collection" with the accessory brand Heavy & Co. Blacksmith that had a Southwest-meets-the-street theme. 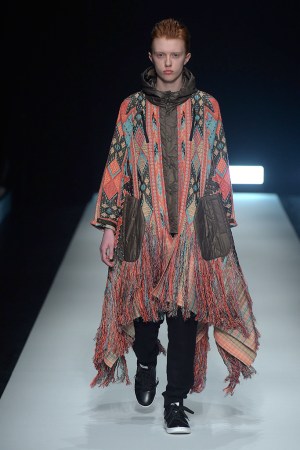 Yoshio Kubo doesn’t do themes. But he does do collaborations. For fall, the designer created what he described as “a joint collection” with the accessory brand Heavy & Co. blacksmith. That translated into incorporating shiny metal cuff bracelets and spiky, dangling zipper pulls into his men’s wear. The Heavy & Co. logo also showed up on the back of sporty blouson jackets with elephant patches on each side of the chest.

As for the clothes themselves: While he denied any direct inspirations,  Kubo seemed to draw on Native American influences this season, employing a variety of Southwestern patterns into his edgy, street-ready sportswear. Multicolored ponchos and sweaters were trimmed in long fringe and sometimes styled with olive green or brown puffer jackets or vests, for a little of that lumberjack look. Many models sported stiff, shiny mohawk headpieces in black or white.

The designer also incorporated the Native American theme into tailored looks, such as a slim brick-red suit with rows of tonal fringe on the front and back, or a long bifurcated vest — colorful tribal print on one side, somber black on the other. It was one of  the strongest pieces in the show, though a pair of intricately embroidered sweatshirts also stood out.

Toward the end of the presentation, the tones shifted slightly. First came a white-on-white exit of coat, vest, T-shirt and pants, which gave way to a series of paint-splattered suits and Ts in a streaked, painted stars-and-stripes print. A unifying move, after this tour of the American West and the Pacific Northwest?