That 5 a.m. post-party moment, when you’re either doing the walk of shame or the stride of pride, was the inspiration behind Ashley Williams’ fall collection. 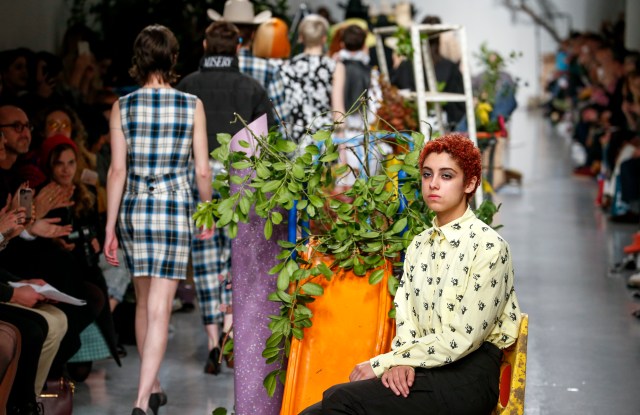 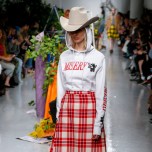 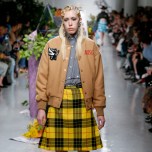 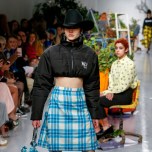 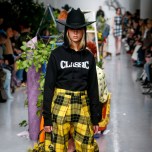 That 5 a.m. post-party moment, when you’re either doing the walk of shame or the stride of pride, was the inspiration behind Ashley Williams’ more polished collection for fall. The lyrics of her favorite song — Kate Bush’s “Under the Ivy,” in which the protagonist takes a breather from a party to await her lover in the boughs of the garden — inspired the introvert mood of the collection, which spoke to the wardrobes of those party girls who love the night life as well as those who’d rather be home watching Netflix.

Party refuseniks were catered to via full tracksuits in pale lemon yellow or gray emblazoned with “Gimme Five” or Stephen King-inspired “Misery” slogans, respectively, the hood worn up and topped with oversize Stetsons for maximum anonymity.

Williams nodded to the Milanese Paninaro street-style trend from the Eighties, in which cool young things thoroughly embraced American sportswear and Wild West influences, and incorporated preppy Ivy League looks into their style. This translated into nice tartan skirts and wide cropped pants and was especially successful in the yellow tartan kilt that came with a buttoned-up gray shirt and a tan varsity jacket, also featuring a “Misery” slogan and a wolf’s head motif.

Fringes of jet beads that dripped from the yokes of minidresses and sparkling diamanté earrings jazzed things up for die-hard party gals, but a black-and-white Hawaiian print used in shirts and separates seemed a little jarring.

Other highlights included the neat jeans teamed with a tartan double-breasted blazer and a T-shirt featuring Shaquille O’Neal wearing a cowboy hat, and the extravagantly fringed cropped cowhide jacket that came with a pair of rigid gray acid-wash jeans.