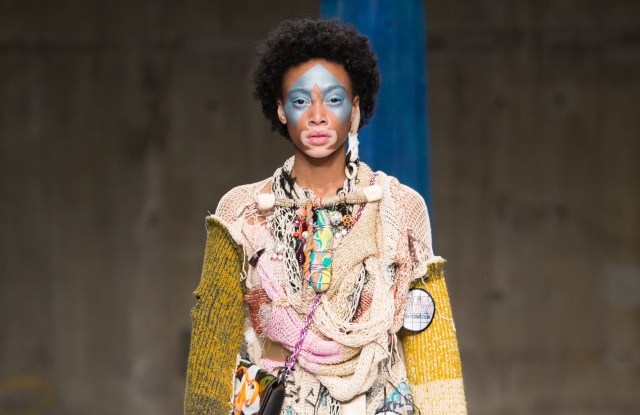 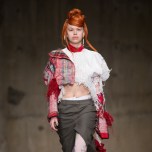 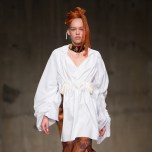 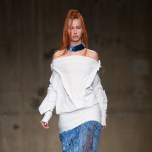 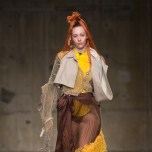 Lulu Kennedy’s coterie of emerging talent provided a rich offering of imaginative and experimental clothes at Saturday’s Fashion East show. British-born Supriya Lele kicked off the proceedings with a static presentation immediately before the show, exploring the connection between her family’s Indian heritage and her London upbringing. Despite the use of PVC, latex and gaffer tape fastenings, it was an elegant debut for the designer who graduated from the Royal College of Art’s MA course last year.

Inspired by memories of watching her grandmother tie a sari, she played with the concept of wrapping. But there was nothing sentimental in her slick reimagining. A baby pink skin-tight top came with a matching pair of wide-leg trousers, topped with a shiny red skirt constructed to look as if wrapped around the waist. She coated silks with plastic to give them the effect of sexy PVC and used them in slim pants that had gold gaffer-tape fastenings and, in the case of the pink pair, wrapped around the leg above the knee. And her latex maxi coat looked like it was made of heavy silk — no mean feat.

Mimi Wade returned with more of her kitsch boudoir creations, this time inspired by motifs from the “Pink Panther” cartoons and her “ugly” dark green corduroy school uniform, which she used to boil-wash repeatedly to try and change the hue to something approaching teal. Cue a camel cord bustier dress that was anything but frumpy. Channeling her love for Old Hollywood screen sirens, it was nipped at the waist, hemmed in saucy black lace and peppered with a trail of playful plastic magnifying glasses containing pink paws. The seductive mien of a lace-trimmed black satin camisole dress was tempered by cute little toadstools, while the Panther himself was printed onto blouses with pie-crust collars, also a nod to her school uniform.

A Sai Ta positioned himself as a chef at a Chinese takeout restaurant for his outing, printing his show notes as a menu and exploring the relationship between the mundane and Chinese and Western stereotypes. Were it not for the cheat sheet, that theme would have been tricky to discern among the textural maelstrom. Fabrics were intensely worked and distressed with needle punching, bleaching, dyeing, ripping and knotting, though some of the raw fabric adornments did bear some resemblance to chow mein. There were elements of devoré, mesh and crochet in the mix, which, overall, had a crafty, vaguely tribal vibe.

With Katie Grand as his stylist and support from Marc Jacobs, it’s easy to understand Matty Bovan’s flair for the dramatic. As the last designer on the bill, stagehands emerged in darkness before Bovan’s outing and erected in a matter of minutes a primitive village (complete with water tower), providing the setting for the designer’s sartorial comment on those dastardly big corporations who make mass-produced everything.

Inspired by medieval history, with special reference to his ancient hometown, York in the north of England, and influenced by dystopian sci-films like “Blade Runner” and “Alien,” Bovan threw together a wild collection of texture and pattern, with a variety of knits, crochet shawls, racing checks, argyle diamonds, bold florals, boiled wool and bold knit stripes in an earthy palette of greens, ochres, moss and rust, highlighted with pops of safety orange, metallic shimmer or holographic sequins (seen in a top worn under a tunic in a patchwork of different fabrics).

Silhouettes were mostly long and lean with volume added via safety harness belts attached to half-skirts or knitted swathes around the waist.