There was a quirky, subversive air to Louise Trotter’s offering for fall. 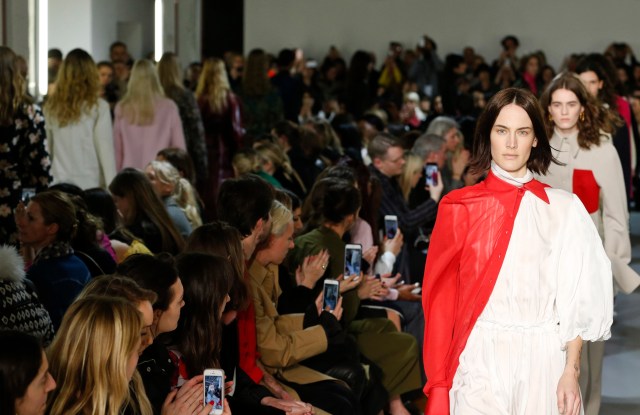 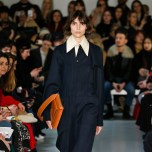 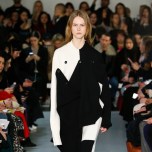 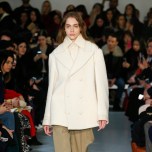 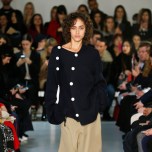 There was a quirky, subversive air to Louise Trotter’s fall offering for Joseph, as the designer experimented with high and lowbrow fabric mixes and gave classic men’s wear staples an irreverent spin for fall. There were chunky knits in noble wool qualities next to a slick PVC trench or a textured vinyl military coat; both worked in oversized proportions, a continuing trend for fall.

In fact, some of the exits were amped up to a point where they could have probably stood on their own. Case in point: a series of full-leg pants with massive cuffs, accentuating this lineup’s mannish allure. The excessive shapes looked less flattering on a couple of baby rompers and some overly complicated pants bound by straps around the ankles.

Backstage, Trotter labeled Joseph a brand, “that lives in an androgynous space,” and that is her personal aesthetic, as well. But even more so this season, she said she wanted to look to “the ideology of a very masculine uniform, on the one hand, and idealistic women’s wear on the other, and put a mirror in between, so they actually reflect each other.”

As with every mirror, the image is slightly distorted, and here it was no different. While the more feminine touches came through via pussy-bow-like blouses protruding from underneath bulky banker suits, upon closer inspection, they turned out to be remastered men’s shirt collars. And in one instance, Trotter worked a heavy military chino into a full skirt, which gave the number a beautiful swagger, proving that a woman can retain her femininity in a man’s world.