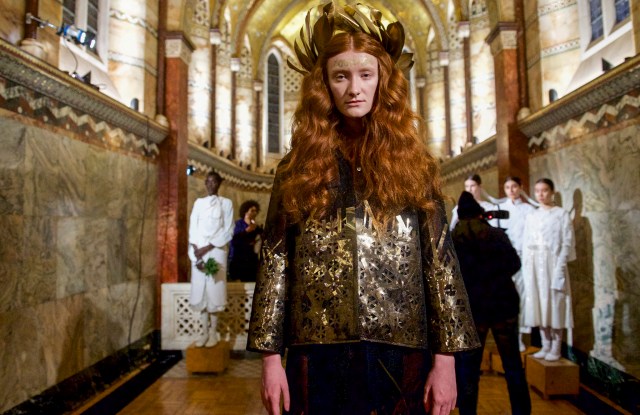 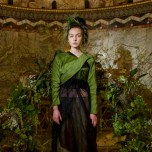 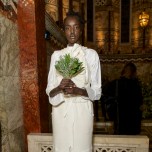 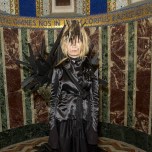 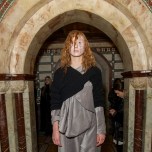 Building on last season’s contemplative presentation — which had the air of an art installation — Phoebe English delivered a conceptual collection highlighting eight themes for fall, spanning from apathy to tyranny.

“It’s a celebration of beauty and female’s strengths,” said English. “It’s also celebrating unity over division and different types of femininity. Each character has an element of color symbolism and identity.”

Her well-constructed fall outing was as strong and resilient as her feminine muses — which created an engaging presentation.

She devised a storyline behind her figures and presented an assortment of characters which she named Tyranny, Fear, Apathy, Voice, Courage, Unity, Repair and Hope.

This season, English said she returned to textiles and focused on materials, texture and the use of color. She employed sheer fabrics in sharp silhouettes, as seen on Hope’s draped cotton green velvet top, fashioned with a delicate black tulle overlay and printed jacquard wide-legged trousers.

The designer tried tailoring for the first time and her play on masculinity was seen in a wool cotton red trouser suit on Tyranny. English tucked and pleated Tyranny’s suit jacket inward at the waistline, for a slightly distorted look. Elsewhere, she teamed with John Smedley on a black knit piece which was twisted and draped and worn over a soft khaki velvet suit, as seen on Apathy. On Unity, she explored  metallics and infused gilded pinstripes on a lightweight long-sleeved white dress worn with a white quilted half jacket — a style the designer created.