The designer put his own spin on Hollywood glamour by balancing light and airy prints with a darker edge. 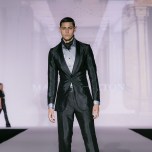 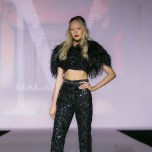 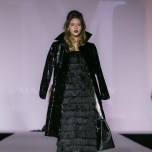 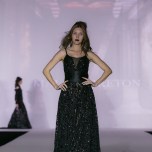 Los Angeles provided the perfect backdrop for what designer Malan Breton described as the third chapter of his fall collection.

Breton, having already presented in London and New York, brought his line to the West Coast for a full-on show that wove fashion and theatrical elements themed around the seven deadly sins. It was in keeping with the Taiwanese-born designer’s background in theater and film.

“There are a lot of changes in New York. People are sort of looking for the next fashion hub, and it could end up being L.A.,” Breton said.

The designer’s presentation kicked off Style Fashion Week Los Angeles, which is the start of a number of fashion-related events from various producers set to take place in March throughout the city.

“This collection itself is a bit more light, but it starts off a bit harder and then it goes into elements of the new moon which, in Asian culture, the moon is very important for rebirth and the chapters of life,” Breton said of his fall line. “Then it goes into a place where it’s the beginning of hope.”

Photographs of flowers and butterflies taken when the designer was in Taiwan last year on the East Coast of Teton became the basis for the collection, but he put his own twist on those images by largely draining them of color. The results are floral prints on silk organza dresses mixed in with heavy gold brocade jackets and gowns. The balance was both ethereal and a bit goth.

The season represented an expansion for Breton, who is known for his men’s wear. For fall, the designer said, he spent more time developing women’s looks and felt the timing of such a move particularly important given the political and social landscape, he said, in the U.S.

“My mother brought me into this world. My grandmother was my mentor,” he said. “Women have been a very strong force in my life and I want to be someone who people say supports equality and all ethnicities.”