Carol Lim and Humberto Leon paid tribute to old-fashioned cinema westerns and the Southwest in their fall Opening Ceremony collection. 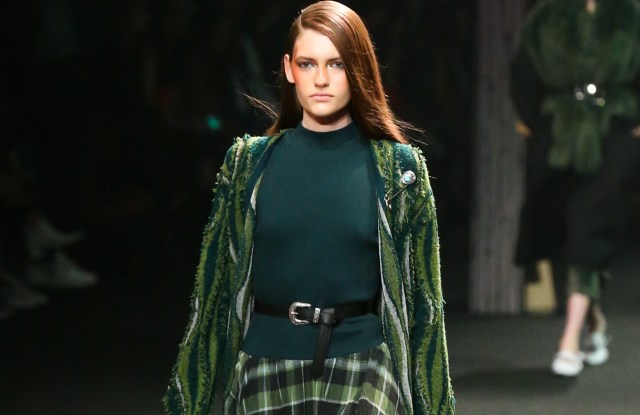 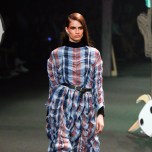 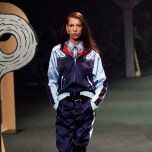 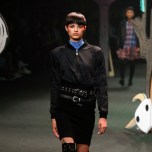 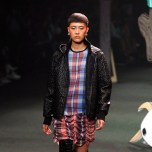 LOS ANGELES — Carol Lim and Humberto Leon grew up in the Los Angeles suburbs, so it was only fitting that the Opening Ceremony founders and designers chose to show their fall collection here, which also marked the 10th anniversary of their Los Angeles store. It was also the second anniversary of Made L.A., the West Coast edition of the fashion show collective that has taken on a populist vibe by selling runway show tickets to the public and offering a retail bazaar with musical performances by artists such as Tyler the Creator, Wiz Khalifa, Snoop Dogg and A$AP Ferg.

It was the first time they’ve shown an Opening Ceremony collection in L.A. and while the collection was somewhat see-now-buy-now, with a few items already available online and the rest rolling out over the next three months, the main event was actually the show itself, which featured a cameo, followed by a full-on choreographed performance, by stuntwoman and actress Zoë Bell, best known for her work as Uma Thurman’s double in the “Kill Bill” movies.

“We just try to do things that we’d enjoy if we were sitting in the audience. Our friends and family have never seen a fashion show before, so we decided to go all out,” said Leon, who is a fan of Bell’s as well as their other collaborator, musician-producer-actor RZA of Wu Tang Clan. RZA, whose given name is Robert F. Diggs, also scored the music for the “Kill Bill” films.

“We go to so many events, so that’s what it is,” added Lim. “They are almost moments in time and less collections. You remember exactly what you’ve seen and the clothing is sometimes secondary, but you remember the experience, which is how they become lasting memories.”

Said Leon, “We feel if people are coming and watching a show, they should have fun and we would like a 360-degree experience. Yes, you are going to see the clothes, but you are probably also going to look at the clothes online the next day, so we try to play equal part to the clothes and the experience. That’s something we’ve done from Day One of our shows.”

The duo has also been inspired each season by their travels, and for fall they journeyed to the Southwest (also a theme for Jeremy Scott’s resort and spring 2018 collections for Moschino, which were shown the night before in L.A.). “We were super inspired by Georgia O’Keefe,” said Leon. “There’s an exhibition of her clothing at the Brooklyn Musuem that is amazing because you not only see her artwork, you [also] see her clothing.” Clearly, the Southwest is having a moment, as Maria Grazia Chiuri also said her Cruise 2018 collection for Dior, also shown in L.A., was in part inspired by O’Keefe.

While that show featured plenty of flat-topped hats and kerchiefs, Opening Ceremony didn’t take as many literal references. While they dubbed the collection “Modern Western” the flowy plaid dresses were just as inspired by the bright colors and darkness of Ken Price paintings.

“We felt this amazing balance between the two, because one’s kind of like an acid trip and one’s just beautiful and glamorous and simple,” said Lim. The sunset-hued plaids were paired with black jumpers and over-the-knee boots, and the same color palette was employed in brocade coats and jackets and colorblocked knits.

As always, the pair celebrated their youth with a few nostalgic pieces decorated with geographical references, such as satin track suits with geological formation motifs, and a double-layer mesh T-shirt with a wavy sand-dune grain, and a kimono with a scorpion scurrying across the back. OC’s popular graphic tees and varsity jackets also featured the scorpion and the slogan “Love Stings.”

The fabrics were a mix of light and airy for days by the pool, while velvet and velour were appropriate for chilly high desert nights under the stars.They also introduced a capsule collection of transformable shirts and dresses with detachable and interchangeable collars and cuffs.

If the show and performance were odes to old-fashioned Western cinema, the party following at the Standard Downtown hotel was certainly in the now.

“It’s just a straight-up dance party which is what we want at this point. We’ve been working on this for a week and we just want a down and dirty fun L.A. dance party,” said Leon, who asked his DJ friends Kingdom to spin.

“The clothes looked nice. I have thank to OC for bringing some creativity to this s–t,” said RZA. “Humberto had a vision in the year 2002 to bring his fashion and his whole swagger to the world. Now at the after party, we’re going to get drunk and get stupid. If you are not having a good time in life, you are wasting your time, so always have a good time.”