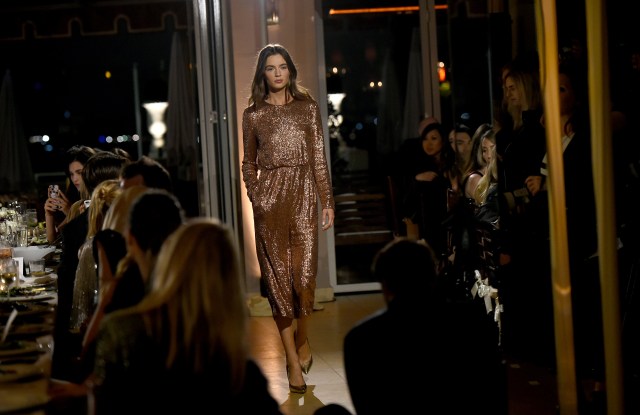 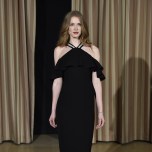 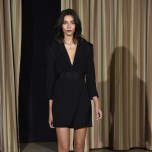 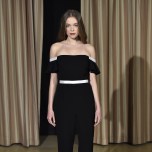 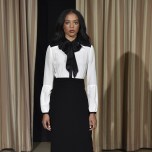 “Why not celebrate glamorous women?” said Rachel Zoe, electing to show her fall collection — devoted almost entirely to cocktail and evening looks — in her hometown of 13 years, Los Angeles.

The 22 looks Zoe sent out at Sunset Tower on Monday night remained true to her monochromatic, Seventies-inspired aesthetic and the statement dressing that has become her calling card in the contemporary market. Some of the strongest pieces included a rose gold sequined culottes jumpsuit and a silver fringed gown.

The show also included six see-now-buy-now dresses, ranging from $295 to $495 and immediately available for purchase on her e-commerce site.

“Rodger [Berman, her husband] named it social dressing. My customers want to dress up and they want to do it with ease. They care what they look like and they’re doing a million things and I want to make it easier for them,” Zoe said backstage at the venue’s two-story Townhouse Suite.

“I thought about asking all these girls to walk in the show,” Zoe mused. “All I’m ever thinking about when I design are the women I know and the women who inspire me, which is ultimately a woman on a mission, whether she’s a multitasking mother or student or has her first job. It’s not the girl who takes five-hour lunches and gets her nails done.”

Of her desire to show in L.A., she said, “I kept sort of fighting it because New York is New York, but I needed to step back and think about who I am selling to and what I want to say.”

The see-now-buy-now element, at an accessible price point, was a clear statement. “If the styles do well we will continue to make them, so they could still be available for fall as well,” she said. “That’s part of it, being reactive and changing with the times.”