Tomas Maier focused on the shoulder in his high-polish show for Bottega Veneta. 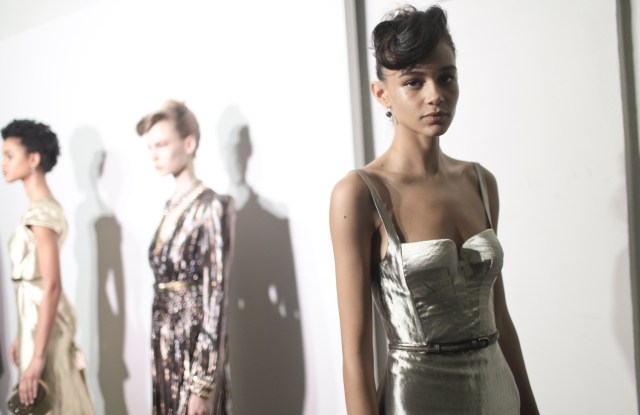 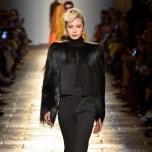 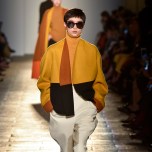 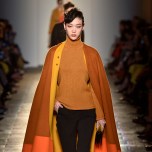 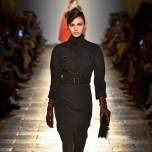 While so many designers are trying to make sense of streetwear motifs at the luxury level, Bottega Veneta’s Tomas Maier once again proved his different-drummer status, this time with a collection all dressed up, slick and polished. The prevailing silhouette, Maier wrote in his program notes, “is like it has been drawn, starting from a precise shoulder line, as if you can see the pencil mark on a sketch.”

To wit: The shoulder proved the major focus, anchoring a lean silhouette that projected power-woman determination, only occasionally crossing over to arch. This collection was about the kind of power glam inevitably evoked by so strong and exacting a shoulder, and stood in high contrast to last season’s proclamation of “private luxury” based on finely wrought sportswear. The men’s wear reflected similar polished and tailored panache, while projecting a slightly gentler attitude, as Maier emphasized the tuxedo, in variations for day and night.

Given the tailored focus, Maier opened with a surprise. He announced his shoulder story on Eva Herzigová, dressed not in a jacket, but a body-con turtleneck with big, rounded shoulders (think Minnie Mouse ears, but farther apart) over demonstrative jodhpurs, a pant option he repeated, but, thank chicness, not often. The shoulder treatments kept coming, and not just one. Rather, they came peaked, puffed, straight and rounded, the multiplicity making for odd viewing but smart merchandizing. They anchored precise clothes that often nodded to the Forties in that by-way-of-the-Eighties manner: belted black twill smoking jumpsuit; golden calf leather suit with bold black embroidery.

Alas, with shoulders the focus, there’s often a trick or two. Maier decorated those of a wool jacket and silk dress with shaggy-dog goat hair — not a good idea. Ditto the shaggy-goat coats, that kind of looked the way they sound. Conversely, a series of silk dresses in dusty shades of yellow, rose and blue, some shot with Lurex, put a soft spin on Maier’s shoulder show. Beauties all.