There was a lot going on in this Emporio Armani collection — and yet there were opportunities missed. 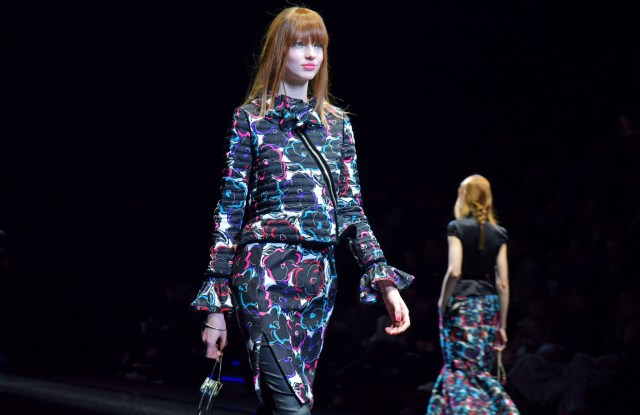 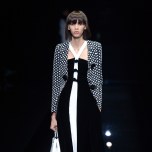 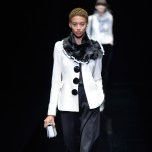 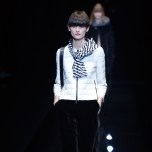 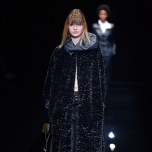 There was a lot going on in this Emporio Armani collection — and yet there were opportunities missed.

Giorgio Armani said his aim was to “turn a page,” and design a wardrobe for the modern woman that’s distinctive, of the moment — something people will look back on and say: “That was the look of 2017.” He believes there is no defining fashion of today — and that what people wear is “too reminiscent of past decades.”

In an effort to move that conversation forward, Armani showed off a wide-ranging collection that was full of long lines — especially sweeping black skirts, some with hoops in their hems or snaking white embroidery, and less formal ones layered under slouchy branded sweaters.

There were plastic pieces aplenty; long skirts with big slits up the side, and transparent tailored jackets and trousers, while splashes of vibrant color — pink, red and green — appeared in Matisse-like cutout patterns, or florals, on dark jackets.

An endless black-and-white checkerboard pattern popped on furs, floppy coats and trousers, while busy florals blossomed over skirts and tops. Then came the layering: Leathery or brightly patterned trousers were worn under lace tunic tops and short jackets with colored piping.

High points included little black or red jackets with statement ties at the neck; long dark furs paired with high-tops, and a fluid pink dress with three-quarter length sleeves. They were overwhelmed by the pileup of color, pattern and sheer volume of clothing on the runway.

In this glorious age of androgyny and comfort dressing, of sporty and deconstructed silhouettes, the designer whose name is synonymous with slouchy tailoring missed his chance. He could have simply “done an Armani,” and focused on what he does best instead of anguishing over the weight of history — and how to invent the look of the decade.

Sometimes, it’s OK for history to repeat itself.