Veronica Etro envisioned an intrepid group of adventurous, strong-minded women. They love a good paisley at any altitude. 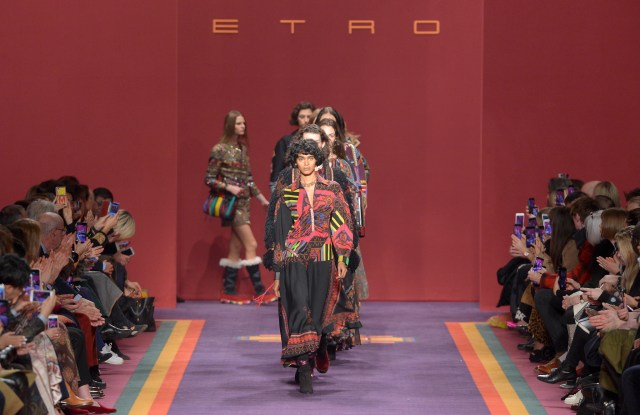 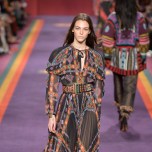 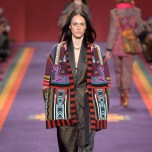 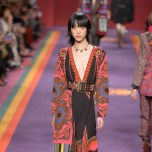 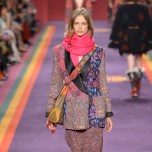 The giant, vibrant kaleidoscope in the entry flagged the designer’s intent. So did an explosion of actual flags — 3,000 of them, bohemian bright, strung over the show space. For fall, Veronica Etro would embrace the house heritage with euphoric command.

During her tenure as women’s creative director, Etro has taken proud ownership of that legacy. Still, its specificity can prove challenging. Along the way, she has varied her degree of gusto, at times going for full-on embrace and at others, manipulating and distorting the patterns to downplay and disguise their paisley-ness.

No such subterfuge here. For fall, Etro imagined an adventurous sisterhood — the “Etro Paisley Tribe” — as intrepid as they are chic. All passionate travelers, here they gathered for some kind of spiritual-cum-fashion convocation. “It’s like an altitude festival,” Etro said during a preview, “in the mountains, in Bhutan, the Himalayas. And there’s a lot going on.”

Indeed so, but delightfully abundant. And if everything going on — the paisleys shared billing with flowers, regimental stripes, harlequin diamonds, dragon patches, mandala insignias, animal spots and on and on — would prove more than dizzying when descended from the mountain and into more secular stylistic settings, many of the clothes were beautiful, their workmanship superb. There were pieces to enrapture confident women who dress on the flamboyant side of artsy.

While the collection pulsed with the eccentric panache at the core of the brand, Etro introduced an unexpected element, comingling the folkloric identity with an au courrant streetwear current. But she didn’t go for the mundane hoodie-as-underpinning route; rather, she reimagined puffer jackets and bombers in elaborate, rich collages of prints, brocades and jacquards — “a pattern collision” — she called the approach. And collide they did, in inventively complicated layerings, the jackets over intensely rendered knits, pants and lovely, diaphanous dresses.

But the biggest statement was the outerwear. In addition to the parkas, Etro showed robes rendered in rich, evocative mixes of fabric and decoration. It gets cold up there in the Himalayas. Why not warm one’s self in bohemian chic?