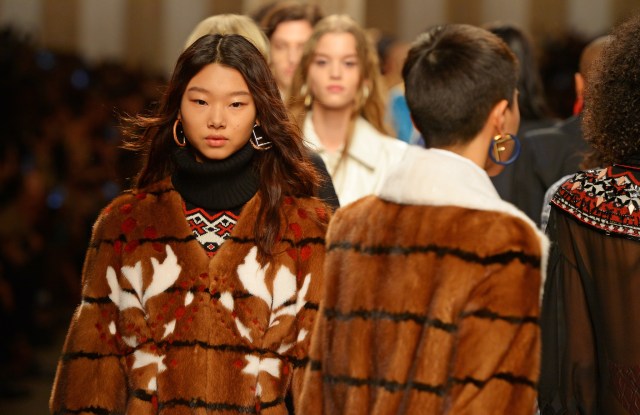 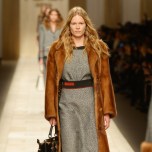 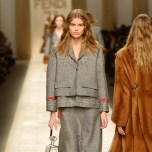 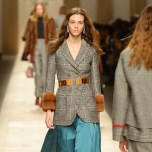 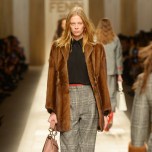 “No fairy tales!” Karl Lagerfeld proclaimed backstage at Fendi. Indeed, sometimes reality-based high chic is enough. For fall, he and Silvia Venturini Fendi delivered a treatise on it. Venturini Fendi noted a Roman inspiration, and why not? The house’s entrenchment in its native city runs deep. Yet there were no obvious displays blasting the connection, no trite pictorial prints of glorious ruins, no Anita Ekberg tresses bouncing with dolce vita glamour.

There were red boots worn with everything. Over-the-knee red boots, a styling stroke that created a sensual undercurrent to the collection’s ultra-tony facade. The show opened with feminine tailoring in men’s wear fabrics — a powerful pairing of enlarged herringbone over Prince of Wales. This appeared as a shapely, double-breasted coat with deep mink cuffs over a longer skirt and a suit with boxy double-layer jacket. According to Venturini Fendi, such doubling up referenced the “stratification” of Roman architecture — about as arcane a reference as one can get.

Here, here to that. Because by the time Paris is finished, these clothes will probably stand as some of the best of the season. Particularly so the day clothes, which were high polish but not at all madame. The collection hinged on a soft A-line skirt that fell to mid-calf. This came in variations belted for alluring curvature — shirtdress; tweed dress with logo waist band; men’s wear jacket belted in gold over fluid blue skirt — and unfettered, the skirts topped by big, loose shapes.

Yet more than any specific silhouette or mood (Lagerfeld really likes to mix it up at Fendi), craftsmanship lies at the heart of the brand ethos. Graphic motifs inspired by traditional woodblock printing turned up as prints as well as intricately engineered knits and intarsia and sheared furs. Some furs fell loose; others were made shapely via waist tucks marked with demonstrative “X” embroideries. Cloth coats were outlined in hand stitched piping. All looked great.

So, too, a series of sheer dresses, all soft-skirted, many with inset geometric detailing. On the runway, they looked lovely over maillots. Swap out the swimwear for a slip, and they are real-world ready, with molto glamour.

No tweaking necessary for the bags to crossover to reality — with the “F” logo, now in single-letter form, making a comeback on metal closures. The bags included a new, structured two-tone box; fringed and otherwise decorated Peekaboos and the smallest offering — a logoed metal ring attached not to one mini pouch but three, in graduating sizes and different colors of leather and python. Because more is more, even when thinking small.