Alessandro Michele likened himself to an alchemist, mixing far-flung ingredients into a heady concoction. 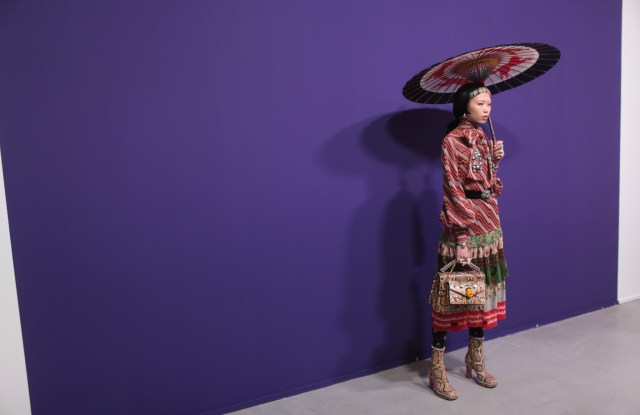 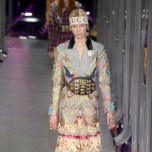 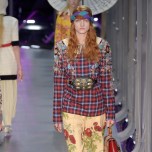 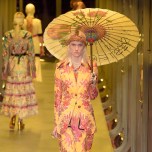 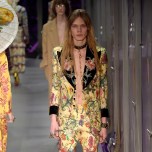 Rather, it had a whole lot going on. So thank God for the backstage walk-through, however brief. It afforded the chance to glimpse what Michele’s Gucci is all about, which is almost-couture.

Michele no longer captivates his audience with the shock of the new. In a very short time, he has established a clear signature: all eccentricity, gentleness, cross-references, magpie pilings and especially, highly decorative clothes and accessories. He’s not interested in seasonal flip-flops. “Creativity is something that belongs to the person that lets a brand live,” he said. “You create every time a story — it’s a chapter. [Your] taste is [your] taste…repetition doesn’t mean it’s not new, repetition means there is something refined and different, upside down. It’s like love.” He likened himself to an alchemist, mixing far-flung ingredients into a heady concoction.

That loaded alchemy is not for everyone. While some experience the proverbial fashion swoon, others shrug in confusion. “Carnival clothes,” remarked one exiting guest. These are indeed niche clothes, which is what fashion at the highest reaches of ready-to-wear should be — special, as in exclusive, not only in price but in point of view, and by definition then, not for everyone.

On the runway, Michele’s fall lineup looked like more of the same, plus men’s. Delightfully the same, but the same. Or almost. There was some movement. The sweet geek with whom Michele launched his women’s vision now looks less innocent (and more real, as Michele cast some non-model artist friends in the show). This time, she wore her quirks and her references — Orientalism, men’s wear, Forties, Seventies, Eighties, flowers, animalia, a soupçon of Chanel and much, much more — with sly audacity. The men remained of the modernist sort, which to say gender fluid, as were some of the girls. If there was news in terms of cut, it came on the men’s side, in suits in shrunken proportions.

Yet these clothes were not about newness or exaggeration of silhouette, or other such elements that can be telegraphed at a distance. For all their visual overstatement, the glory was in the details, the craft, the countless subtle creative ideas and choices, many of them experimental, that went into making this dress with a bee embroidery different and distinctive from last season’s dress with a bee embroidery. The ornamentation was as simple as a wide, shirred green velvet ribbon across the hips of a floral dress or a burst of floral embroidery on a mannish coat and as exquisitely dizzying as you can imagine. Case in point: a magical gown with a punk-Renaissance air, made from what looked like a thousand colors, textures, treatments and embroideries, punctuated with a big red flower appliqué at the waist. The sleeve, a trumpet of embroidered and bejeweled green velvet punctuated with a deep red cuff quilted into a pearl-studded grid, was a masterpiece in itself, though one that, from the far-away front row, could have been completely unappreciated.

These clothes were more than the latest iterations of the madcap wackiness of a mad fashion alchemist. They were carefully considered, exquisitely rendered adventures in real fashion. From a distance, they amuse. Up close, they enchant.