Though Angela Missoni handed out pink pussy hats at her show, most of the clothes didn’t track as political, but they did track as chic. 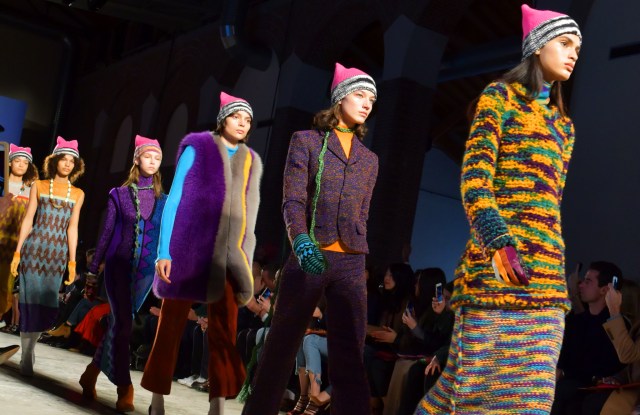 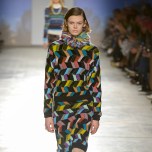 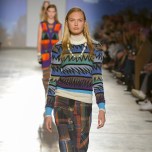 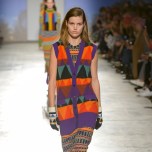 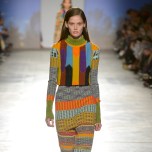 When Donald Trump and his merch were bounced from Macy’s two years ago, most of this industry likely thought his association with fashion was over (but for being dad to Ivanka, anyway). Has this industry called it wrong on him before?

The President — or reaction against him — has been all over the runways, or more accurately, all over show notes and backstage conversations in New York and Milan. Angela Missoni’s reaction made it onto the chairs in another way as well — in hats. Hundred of pink pussy hats, the accessory symbol of feminist outrage over the Trump presidency. Hey, the woman’s got deeply held beliefs and luxury knitwear factories, so why not?

Pink caps with kitty ears —  point taken. As for her show notes that said Missoni “communicates the femininity of our times, prepared to confront the conflicts and dilemmas of our contemporary society: the conditions, needs and rights of all women and all minorities” —  not so easy to translate that one via mélange knits.

Nor easy to write a fluid transition, because save for two sweaters at the end of the show —  one bearing the Venus symbol for women and the other, two hearts on the breasts, the clothes didn’t track as politically inspired. They did track as chic. Next season marks Missoni’s 20th year as creative director at the family business. Backstage, she said that as the milestone approaches, she has spent more time than usual investigating the archives, including her own. Her apparent takeaway: embracing the house patterns and colors in all their wanton flamboyance. Too much at times? Are a multicolor zigzaggy sweater over pants in a giant multicolor plaid or a turq-and-pumpkin differently zigzaggy sweater over a bright cabana-print skirt finished off with a long striped boa too much for ya? Yet more often, Missoni controlled the frenzy, keeping to one pattern per look or subtler combinations. And she favored linear silhouettes, creating a sense of sporty chic: shapely plaid coat with a few inches of cropped mélange knit pants peaking out from under; graphic sweater over tonal patterned skirt; a color-blocked fur vest over T-shirt and pants.

Feisty, fun and not for the faint of heart. Nor is Missoni. After her bow, her family materialized around her, and a mic materialized in her hand. “There’s a bond between us that keeps us strong and safe. The bond that unites those that respect all human rights,” Missoni said, asking those in her audience to join her and on the runway to “show the world that the fashion community is united and fearless.” Some did. Many more nodded in approval as they rushed for the exit.