Politics, seduction and a set decorated with beds. Just the still of everyday chic from Miuccia Prada. 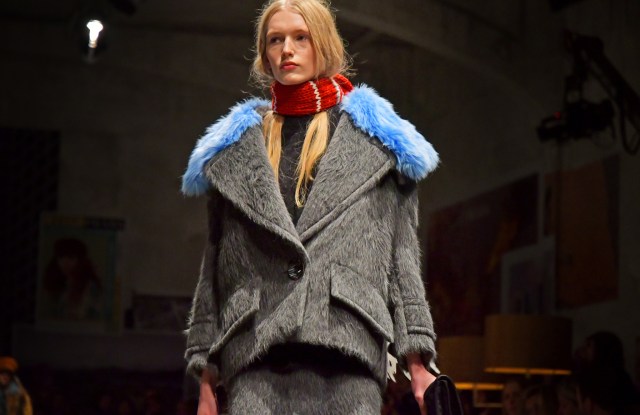 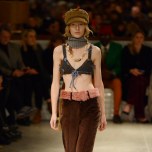 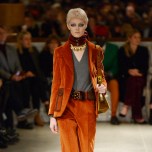 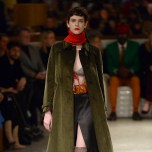 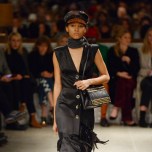 It was fabulous. Let’s get that out of the way early, because it was also fascinating. Not that Miuccia Prada ever stages a mundane show. She’s a great designer with big thoughts in her head — a combination that makes for compelling runway action. As committed as she is to a belief system centered on feminist issues and the ways in which women are perceived, come show time, her first priority is to deliver major fashion. Yet this season, her show featured a point of secondary intrigue apart from the fashion.

Prada’s younger self famously attended communist party meetings decked out in Saint Laurent, the stuff of her everyday wardrobe. Fast forward past decades and multiple political uncertainties, and she still believes in the substance of style. Backstage, she said this show was developed from her men’s collection. “And, of course, we had to do the women after what happened…” — what happened, one assumes, the Western political upheaval. “So this became kind of ‘the City of the Women’ (the name taken from Federico Fellini’s ‘La Città Delle Donne.’). So we were doing this set, these manifestos, with Rem Koolhaas [and his AMO Studio]. They had to embrace the world but without being too political, because I never want to be too political, directly political, in my job.”

Perhaps AMO didn’t get that memo. The set featured an undulating wooden partition creating small spaces furnished with benches and random beds with posters and signage of women in various capacities covering the walls. It was all likely sprung from deep, meaningful thoughts, but nothing too obviously political — unless you read AMO’s explanatory notes.

“Fashion is about the everyday and the everyday is the political stage of our freedoms,” they read, adding that in this time of “several cultural uncertainties — it is hard to think that any form of creative production will be exiled from taking a position in favor of the liberal values we share.”

One assumes that Prada signed off on the text, and that in effect, AMO is speaking for her. While the “we” of the shared liberal values isn’t spelled out, the narrowest interpretation includes AMO and Prada, though her name isn’t referenced. Or, it could mean all artistic types. Most expansively, it could be read that, consciously or otherwise, Prada views her customer base as a creative, ideologically monolithic constituency whose members share her political views — how could they not? Fascinating stuff. And gutsy.

Certainly that base shares Prada’s yen for supremely elevated trappings of everyday chic. From considerations of manifestos and not too political verbiage, her backstage conversation segued to her desire for a collection founded on the idea of smart seduction, addressing “the problem that women want to appeal, want to be beautiful, but how [to do so] if you are intelligent.”

Now, I’m going use a bad word here, a word that — in this age of diversity and gender fluidity and alternative lifestyles is considered by many to be offensive. Here it goes: normal. For the purposes of this review, I’m dividing the world into two kinds of people: fashion people and normal people. I just don’t see the normal set seeing the seduction angle. Intriguing — yes. And delightful, wondrous, witty, pile-on-the-superlatives-the-way-Prada-piled-on-the-weighty-knits. But seductive as most people casually interpret the word — somewhere between knowingly flirtatious and “Hello, Sailor?” No.

The fact that Prada sees it as such makes her and the clothes all the more interesting. She took traditional trappings of glamour — feathers and embroidery — and lavished them on everyday staples: pencil skirts, cardigans, tailored jackets, bear-hug outerwear, a chemise here and there. Often, these came in weighty fabrics — corduroy, thick knits, tweeds, shearling — put together in audacious collages of color and pattern, atop heels fastened with giant buttons or big, furry multicolored mukluks. Orangey tweed and leather jacket over bright yellow skirt with red embroidery and blue white feather hem? Cocktail dress with feathered bonnet? Prints done in collaboration with artist Robert McGinnis? Whatever their politics, fashion ladies will succumb to the seduction.