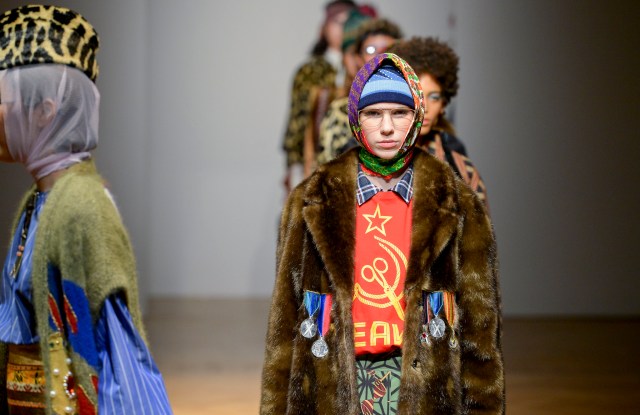 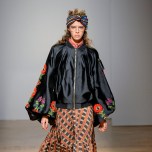 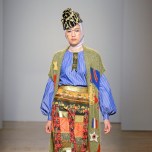 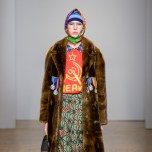 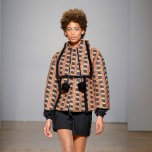 The models at Stella Jean were not the first this week to walk the runway in a headscarf: That honor went to Halima Aden, the hijab-wearing Somali-American model who took part in the Max Mara and Alberta Ferretti shows.

Jean styled some of the models in her show with tightly knotted Russian folkloric scarves, in some cases topping them with beanie hats or garrison caps made of patterned fabrics. The designer did not put a political spin on her choice, though she delivered plenty of other messages with her Cold War-themed fall collection.

“It’s the representation of a culture, but not in a folkloric way, because it would become a parody, and I can’t allow my collection to be a parody of any culture,” she said.

A naïve rendering of a snowy landscape inspired maxi cardigans that were hand-knitted in the Italian region of Umbria, one of the worst affected by a powerful earthquake last October. “It shows the resilience of these women,” said Jean, noting each cardigan takes around two months to create.

Another statement came in the form of a small clutch inspired by a Syrian inlaid backgammon box. Dubbed “Propaganda,” it was designed by Assaad Khalaf, who left his hometown of Damascus four years ago and recently completed a master’s degree in Haute Couture in Rome.

Jean said the bag was made in Damascus and traveled to Milan via Beirut. “So it’s a symbol of very hard migration, very hard work,” she said. “It’s not about just giving charity to countries, which are in a difficult moment. It’s not about helping — we can work together. For me, this is a kind of cooperation.”

Speaking backstage before the show, Khalaf said he was forced to shutter his fashion label in 2013 due to the war. “This is something really small, but for me, it could be a really important message — anything to let the world understand that Syria is not only about terrorism,” the 29-year-old said.

In a season where designers have used the runway as a platform for political messages, Jean’s melting pot aesthetic and militant stance carried extra resonance.