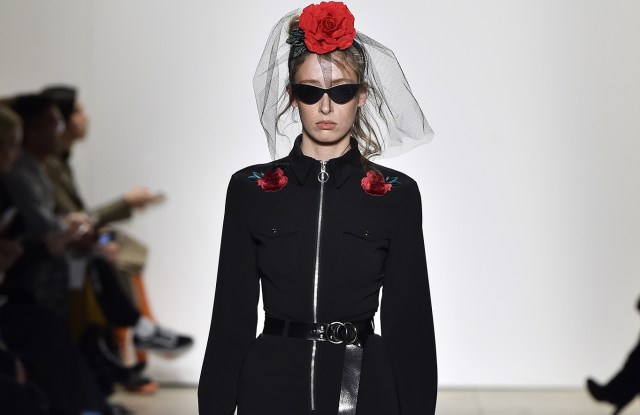 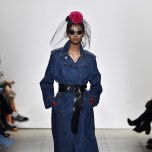 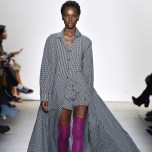 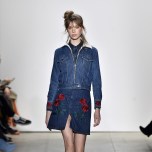 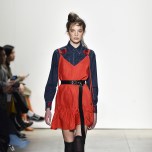 Looking back through Adam Selman’s collections, it was about a year-and-a-half ago that something clicked. He got consistent, started carving out signature items. The endearingly unrefined bubblegum bad-girl attitude on which he arrived remained in tact, but everything became more streamlined. At his fall runway show — his strongest yet — it became clear: He’s becoming a brand.

“Baby steps,” Selman said backstage, pointing out the rose-embroidered Chuck Taylors he did in partnership with Converse. “They’re only for the show, not for sale.” Even so, he made big strides in real branding, for the first time developing subtle buttons, patches and rivets bearing the Adam Selman logo for the lineup’s nifty range of denim. All of it — the show-opening biker jacket that tied at the waist and cuffed jeans; a great wrap denim trench; a cowgirl shirt; a workwear jumpsuit with a fitted top and wide legs — was classic stoned-washed blue, embroidered with red roses. A big inspiration was the 1975 book “American Denim,” which focuses on folky, hippie-ish customization of denim. Selman’s versions were fresh and cheerful with a mild western vibe — in line with the current moment of novelty, faux DIY’d jeans without feeling desperate to cash in on it.

Selman moved on from the denim but kept the rose theme going in a range of ways — all of them worked. Ruby red roses were embroidered on sheer dresses, shirts and pants done in ruby red floral embroideries. Up close, a rose print created in collaboration with artist Ricardo Fumanal revealed that the blooms were cheekily positioned between the legs of ladies. Gigi Burris designed mourning veils that fell from a single rose. And for the sake of a “fashion moment,” a model in metallic pants and little else carried a giant rose bouquet to conceal her bosom.

Lest it seem everything was coming up denim and roses, the collection had breadth. Selman made sure to cover party dresses, which do well for him at retail, and create a potential red-carpet moment or two. Slinky, swingy short dresses and gowns in pink, red or black were trimmed in flat rhinestones, another Selman signature. He found new ways to work them, for example, a sheer bodysuit with a high neck and open back, fully embroidered in green rhinestones. It was fabulously fleshy — and fleshy like the dress he sent Rihanna practically naked to the CFDAs in, yet slightly more approachable. In other words, it was on-brand.