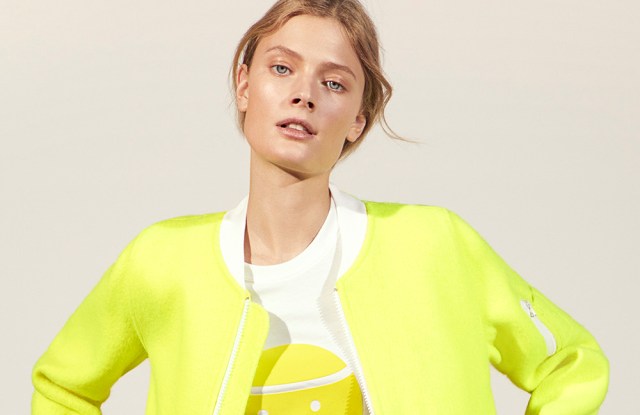 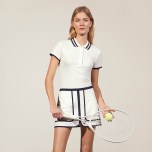 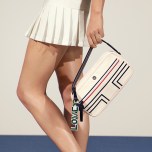 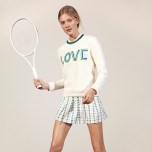 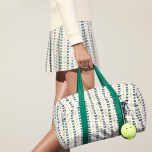 Does anyone really want to walk around dressed like a tennis ball? Believe it or not, yes, in the hands of Tory Burch. She successfully turned a tennis ball into a delightful — and very bright — fluorescent green bomber jacket made from the scruffy scratchy stuff that covers tennis balls. “Apparently it’s never been used before for clothing,” said Burch, during a walk-through of her fall Tory Sport collection. “It’s not that itchy at all either, which I was worried about.”

The bomber will stand out day or night, which was one of Burch’s big endeavors for the fall lineup. The general aesthetic remained consistent — bright sports gear, performance and “coming and going,” as the less athletic pieces are known internally, with a cheerful retro prep kick — but there was an uptick in reflective details on metallic Windbreakers and running shorts.

The chevron stripes that are signatures on Burch’s running tights were blown out on kitschy cool track suits, T-shirts and après ski sweaters.

Burch made hitting the lodge look very à présent with color-blocked quilted jackets, a great microfiber down parka with a fur-lined hood and quilted snow boots, good for the slopes and trekking through the sludge in the city.

In other Tory Sport news, the collection has newly launched at wholesale with select online partners, including Net-a-porter and Neiman Marcus.