A trip to Cornwall got Sarah Burton thinking about ancient legends and artisanal crafts, which she incorporated into a stunning fall line. 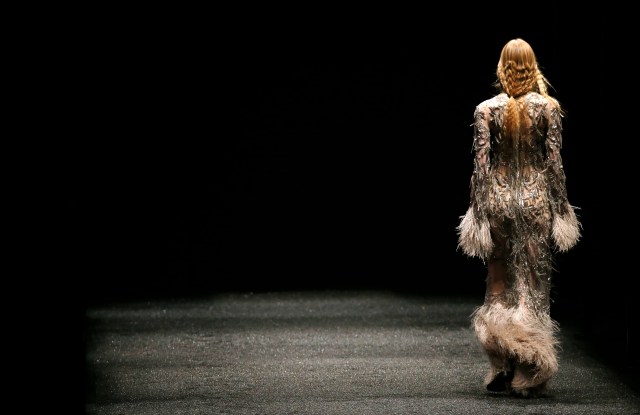 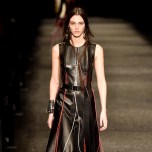 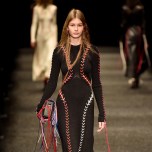 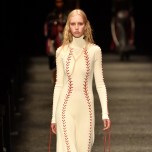 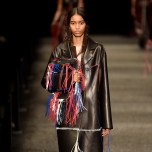 Sarah Burton is both artist and storyteller — no news there. She’s also a smart cookie who can speak to the cultural moment while deftly introducing lucid commercial proposals and without compromising her creative narrative.

Burton’s Alexander McQueen exists on the precipice between reality and reverie. Her collections typically start with a factual germ, often geographic, which she then spins through a web of British legend and her own imagination. The season found Burton waxing lyrical about Cornwall. A trip there got her thinking about paganism, about ancient traditions — particularly the “Cloutie” or wishing tree — and especially about creative communities and the way in which they have traditionally united people to get things done. “Our studio is a creative community,” Burton said backstage before the show.

All of that came together in a collection that was as savvy as it was lyrical. While only recently it would have been viewed as pure romance, today, any use of the word “community” takes on political resonance, a reality unlikely lost on Burton, particularly as the female warrior features so prominently in her work.

Burton’s research drew her into a world of artisanal crafts, while the notion of the Cloutie tree — people would tie ribbons and string on a branch and make a wish — opened up all sorts of decorative possibilities. She incorporated concepts of artisanal embroidered samplers and cross-stitching into powerful leathers and exquisite dresses. Often these featured a patchwork motif, rendered literally as well as in one of the most intricately wrought and gorgeous jacquards imaginable.

Throughout, the silhouette was linear and sensual. Bodycon ribbed knits were attached to gold mesh in “soft armor” mode, or were whipstitched for graphic intensity. Embroideries featured renderings of flora and fauna, each picture symbolic of something, their meanings sprung from ancient pagan ritual or the designer’s own musings. Tailoring was languid as well, ingeniously so, retaining the precise McQueen shoulder before falling into relaxed asymmetry.

The whole thing had a medieval tribal intensity, yet one replete with beautiful clothes to wear, including many right off the runway. Tie that one on the wishing tree.