Andrew Gn's fall collection was a celebration of the confluence of cultures, combining sartorial polish with tribal kick. 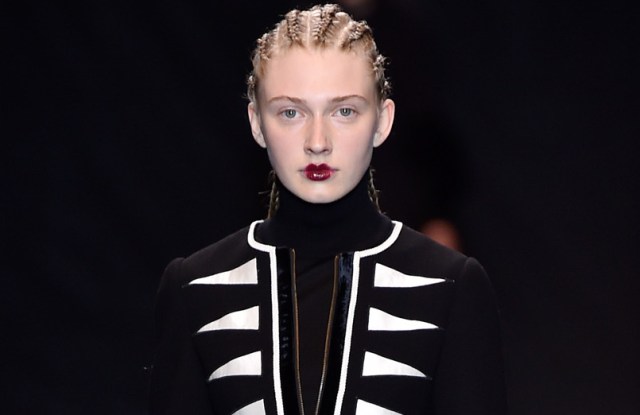 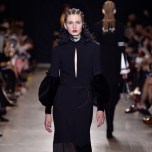 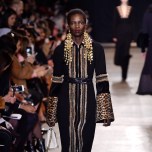 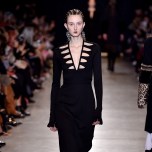 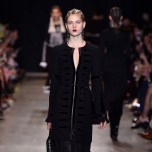 Andrew Gn delivered a sartorial tribute to globalization, and the confluence of cultures, in a collection combining polish and tribal kick.

“When you think about it, nobody’s pure these days. I’m one-quarter Japanese, three-quarters Chinese, born in Singapore, live everywhere…. The more we advance, I think this is how the world is going to be, so you can’t resist it,” said Gn backstage. What he found fascinating during the research stage, he added, was that once applied to the clothes, a lot of the graphic elements brought to mind codes from cultures far, far away from those they were originally inspired by. Case in point: a black jersey top with white geometric tribal thread-embroidery that was based on Egyptian motifs but evoked Scandinavian knits, or the white Gustav Klimt-esque swirls on the matching wool crepe skirt — its fringed kick hem swinging down the runway like a grass skirt, which was also reminiscent of Maori drawings.

Klimt’s relevance to the show was his link to the aesthetic movement, “which was the beginning of globalization,” explained Gn. “People, at the end of the 19th century, started traveling to Africa, to Asia and the Orient and bringing things back.”

Other highlights from the black-and-white section included a marble-effect jacquard poncho and a silk flared dress in a delicate feather print with fringing. The line’s tailored coats, meanwhile, included a limited-edition styles with fur trim and cuffs in an antique leopard-print silk cut velvet sourced by Gn.

Heart-stoppers from the show’s colorful rush of cocktail gowns, with their Victoriana-meets-Art Deco grandeur, included a zebra-effect green jacquard dress with bishop sleeves and the show’s closing look, a green velvet evening gown with an Aubrey Beardsley-inspired peacock appliqué in antique gold, recalling a relic of Imperial China.