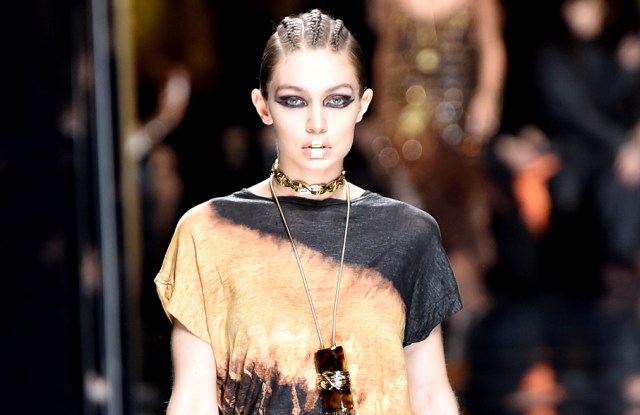 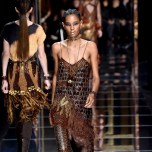 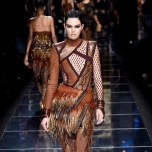 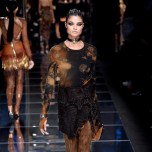 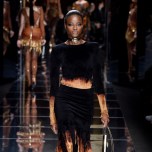 That might have been the statement T-shirt sent out by Olivier Rousteing for his fall Balmain show, except the designer chose to show, not tell. This season, his glamazons came decked out raw pelts with a stitched-together feel. Kendall Jenner looked particularly fierce in a black dress assembled from crocodile skins, a tribal-looking metallic lip ring tracing a gleaming line across her mouth. Other options included a shaggy shearling sleeveless coat, or a tunic top pieced together from panels of glossy ponyskin.

“It’s all about a return to the forces of nature. I wanted to create strong Amazons. Women’s power today is extremely important, and I think I reflect that with this collection. It’s very feminist,” Rousteing said backstage. Not surprisingly, his vision of feminism was not of the pink pussy hat variety.

“We’ve been seeing a lot of messages recently on T-shirts and on clothes. The strength of Balmain is not necessarily in writing a word, but in creating a silhouette that demonstrates a woman’s strength better than words can do,” Rousteing said. “These are the Amazons of the future, the Balmain Amazons: they are couture, they are rich, they are rock ‘n’ roll.”

Indeed, the wealth of craftsmanship and materials on display was impressive. Rousteing is rightfully proud of the house’s historic ateliers, which turned out dresses and tunics in elaborate patchworks of crystal mesh, jacquard, leather appliqué, embroidery, velvet, fringe and metallic studs.

Love or hate his maximalist approach, this was craft of the highest level. Panels of caramel suede formed a zebra pattern on a black stretch tulle column dress, while metallic plaques gleamed like leopard spots on a fishnet dress.

Rousteing diluted the impact of some dresses by adding panels depicting wolves — central to the parallel theme of the collection, namely the rebel roar of heavy metal. The wolf designs worked better on T-shirts that anchored a boho rock star wardrobe of maxi cardigans, eyelet-studded leather and thigh-high boots.

Capping off the looks were Balmain’s new line of handbags with gleaming gold hardware. Even Amazons need a place to stash their lipstick.