Maria Grazia Chiuri's unified her wide-ranging sophomore collection for Dior with a focus on blue. 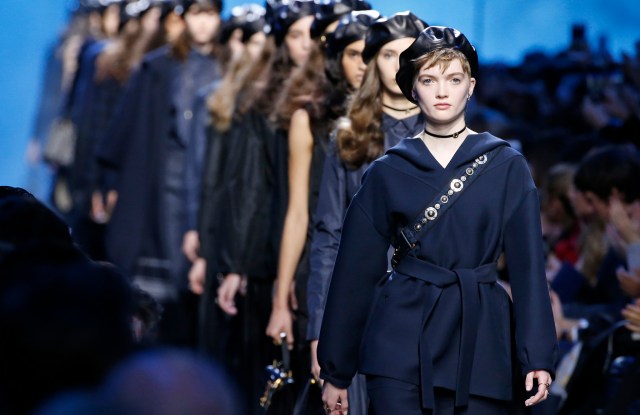 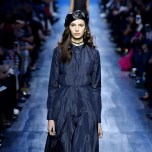 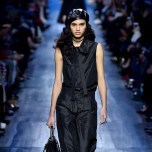 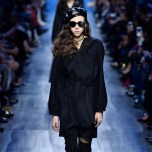 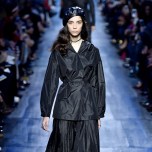 Immediately upon her arrival at Dior, Maria Grazia Chiuri set about tackling what has long been a challenge for the house: daywear. She undertook that task at a politically charged moment in the culture, a moment that spurred her to include her now-famous “We should all be feminists” T-shirts in her debut collection last season.

Still, it was a surprise during a backstage preview when Chiuri used the word “genderless” as part of the appeal of the color blue, on which she built her fall collection. If there were ever a house with a gender-specific aura, it’s the historically ultrafeminine Dior (though its men’s in the age of Hedi certainly had crossover appeal). It would be a total misrepresentation of the conversation to imply that Chiuri dwelled on the concept of gender fluidity, or that it was a primary reason for her invocation of the color. (That distinction goes to a quote from Christian Dior, written in “The Little Dictionary of Fashion.”) But it does speak to a matter that could get in Chiuri’s way if she’s not careful. In a perfect world, none of us would let our jobs compromise firmly held philosophical and ideological beliefs. But slogan clothes aside, pants, jackets and shirts are only politicized by projection. What should matter to Chiuri as creative director of Dior is that her vision and clothes make sense for the house and its customer base, both the current one and that which it wants to attract, rather than that they fit tidily under au courant umbrella adjectives.

Back to the quote of the house founder: “Among all the colors, navy blue is the only one which can ever compete with black, it has all the same qualities.” The words spoke to Chiuri as a member of a generation drawn to black; she thought that focusing on blue, rich with natural and cultural symbolism, would facilitate a fusion between the house creative ethos and her own. To a large degree, it did, imposing unity over a wide-ranging collection that featured everything from jeans  to evening.

Chiuri opened with day: a hooded monk’s tunic in cashmere cut to jacket-length and belted over matching cropped pants. If the clerical reference triggered thoughts of Valentino, the item itself, which Chiuri repeated in several versions, didn’t at all. In fact, she listed uniform dressing among her references, and leather berets and cross-bodies slung with the bags in back imposed a militaristic ardor on some of the dark, unfussy clothes.

Chiuri went more obviously Dior with jackets (yes, some rang the Bar bell) over graceful full skirts, but less so with denim, which looked fine but felt like a reach, particularly the jeans-and-jacket-as-suit look. No such issue when it came to a pair of real suits — short and long versions of a three-piece idea, the third piece a cutaway cape worn over the jacket. They felt new while presenting a more familiar take on chic. So, too, did some inviting dresses, including a natural-waist beauty with full sleeves to the elbow.

Evening proved interesting, as Chiuri’s models wore her moody, ethereal tulles and embroideries with relaxed attitudes. Yet the biggest stars weren’t the dresses that sparkled, but a trio in deep blue velvet, as intriguing as the midnight sky.