Candy for the eye and food for the fashion brain, Rei Kawakubo's fall show was about "the future of silhouette." 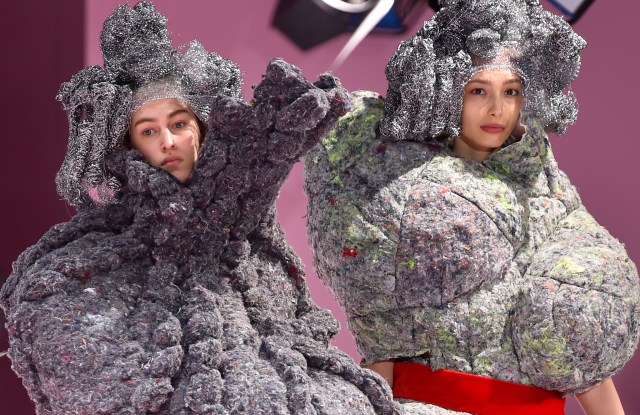 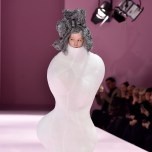 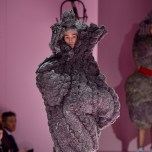 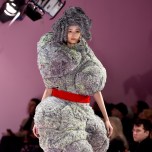 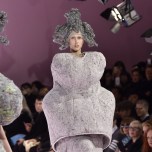 Only a fool would dare call Rei Kawakubo formulaic. But there are certain things one can expect from her runway shows. One is a two-to-three-word description of the collection, issued backstage straight from her mouth. For fall it was, “The future of silhouette.” Another thing that has been consistent, especially lately, is that the runway is less a platform for “clothes” — even clothes by Kawakubo’s standard — than big ideas and bigger shapes. Candy for the eye, food for the fashion brain.

The first thought that came to mind when the opening look — a fuzzy white sculpted form with Picasso-esque curves at the bust and backside, but no armholes — walked out on the pink runway, against a pink wall was: cotton balls, maybe unfinished sculpture. Then another similar look came out, both creatures wearing Nikes with black bows on them and curly wigs that looked like steel wool. The models made eye contact, gave each other knowing looks and meandered around the runway like a pair of discombobulated twins who had just wandered into a different dimension and were having a look-see.

According to Kawakubo, the silhouettes of the future will be made from fabrics both humble and fancy. There were gray swirled blobs that looked like they were crafted from the matted insulation used to line attics; an hourglass form with narrow shoulders and curved, jutting hips in curlicue embroidery; a structured tent of a bulbous, crinkled and bunched dress that looked like a paper bag; silver Mylar blobs, and a red velvet “jumpsuit” that was molded to the body like a regal cast. The paper bag aside, the looks came out as pairs, or groups of three. The models’ body language and interaction added seemingly symbolic or meaningful messages. Each time, a single model went first, at times looking over her shoulder as if a friend was lagging behind. They watched each other, sized each other up, whether out of familiarity, competition or suspicion, it was unclear. In the future, silhouettes communicate.