Dries Van Noten marked his 100th fashion show with the clothes and the models who have telegraphed their power from the beginning. 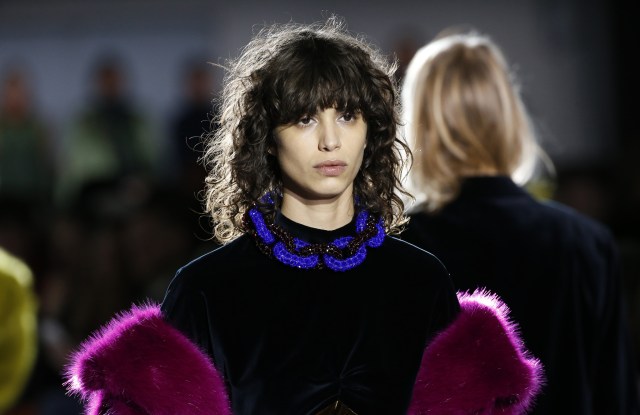 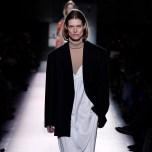 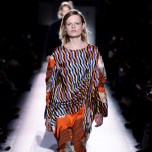 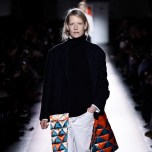 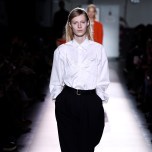 Feminism expressed via fashion — the current has run through the fall collections. Dries Van Noten didn’t articulate consciousness of the political moment as a foundation of his collection. Rather, during a preview and in his show notes, he pointed out that this show would mark a milestone — it would be his 100th, including women’s and men’s. (His first: men’s spring 1992.) He took the opportunity to look back, he wrote in the notes, “Celebrating without nostalgia and with little artifice.”

Van Noten chose to celebrate not with a party or a bells-and-whistles set, but with the clothes and the women who have telegraphed their power from the beginning — literally generations of runway models.

Van Noten dressed them to play up their strength, both as individuals and as a gender. He made the clothes manifestations of that message rather the message itself, a bold decision. Designers often say their clothes should project the women wearing them, but more often that not, the runway doesn’t afford that chance. Here it did, always powerfully, if not always easily. As usual, Van Noten crossed traditional masculine and feminine elements on his runway. Here, he favored the former in strong-shouldered, amply cut tailoring, delivered both unfettered and with significant zhushing up: the addition of colorful fake fur sleeves to one black coat, and big, graphic embroidered discs to the hem of another, both great-looking.

Van Noten’s other big message: prints; he’s a master of the genre. As part of looking back, he revived favorite patterns from his archive, overprinting them with additional motifs so that nothing is today as it was then. It made for a bold display in an audacious palette that some may consider difficult, starting with orange. He used the prints on some tailored pieces as well as separates and lovely languid silk and velvet dresses.

As for the numerous furs — every one a fake. And fabulously so, whether a big, classic coat or a colorfully glam jacket-cum-stole. Though hardly militant on the subject and a recent real fur user, Van Noten said that from a research-and-development standpoint, the fakes are so good, there’s no reason to use real fur today. And acrylic (or whatever) prices out in a more customer-friendly way than the real stuff, anyway.

For the finale, the models strode en masse up the runway. (Their numbers were impressive — upward of 50, who wore the 63 looks). It was hard not to see these strong, impressive women, in unison but utterly individual, as a microcosm of a powerful women’s march, a convocation to be reckoned with. Way to go, Dries. Happy 100th.