The Givenchy design studio turned an awkward, in-between-designers season into a capsule of Riccardo Tisci's greatest hits — all in red. 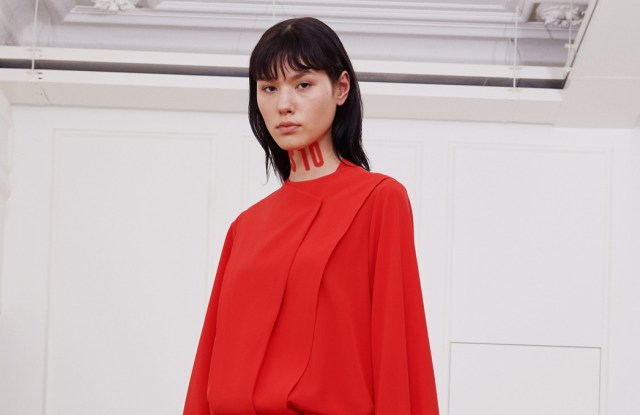 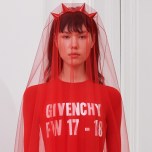 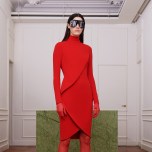 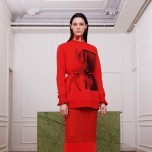 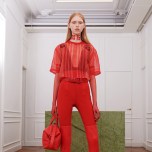 Someone at Givenchy is very clever. Fall was an interim season at the house, in between Riccardo Tisci’s tenure and whomever the next couturier will be. Instead of having the design studio issue a rudderless, so-what collection as space filler, they came up with a smart capsule that will probably become collector’s items.

The collection consisted of 27 memorable looks and greatest hits from Tisci’s 12-year tenure, done entirely in bright red. That included shoes, bags and jewelry, too. From fall 2013 there was a Bambi sweatshirt belted over a grommeted skirt, and a grommeted sweatshirt over a long tulle “naked” skirt. From fall 2012, there was a belted, embroidered lace and beaded short slipdress with red opera gloves and the famous knee-high riding boots that were layered with heel-covering sheaths. From fall 2008, a silk top with a tulle neckline and ruffles around the bust worn with slouchy tailored pants. From spring 2011, a clean, triple-layered blouse and a short skirt in strips of mismatched ruffles. From spring 2015, a sheer striped T-shirt with stars at each shoulder, over a bodysuit, skin-tight pants and thigh-high, open-toe stocking boots with a nail-head heel. From spring 2016, a  long languid tuxedo jacket over a waist coat, lace camisole and wide, fluid trousers.

Filling the spare white showroom with all-red merchandise made for a striking visual trip down memory lane. Red was chosen because it’s a strong color, which Tisci often used in his collections, but the lineup will also be produced in black and nude for retail. Each piece will be sold with a tag stating the season in which it originated, another smart idea. Customers and fans have one more chance to snap up a piece of Tisci’s game-changing vision for Givenchy. Who knows where it’s headed next?