Ackermann’s clothes befit women of substance — been there, done a whole lot, their depth of experience central to their allure. 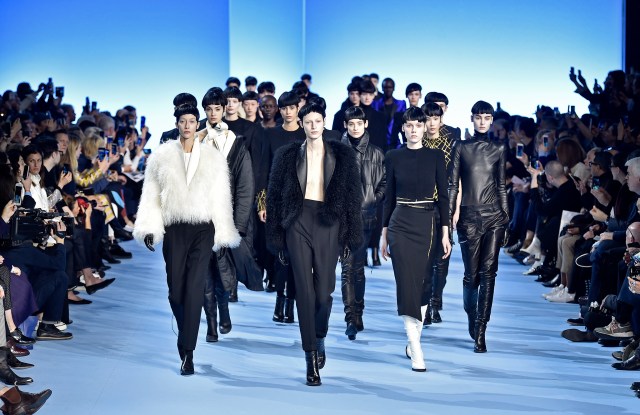 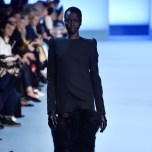 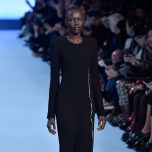 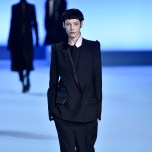 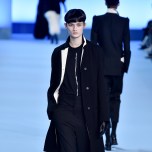 Haider Ackermann is not feeling for overstatement these days. “I just really wanted something quiet and silent,” he said backstage after his show.

Ackermann’s visual “quiet” stood in opposition to last season’s vibrant birds of paradise collection. Though he’s one of the most skilled colorists working in fashion today, he stuck almost exclusively to a palette of black and white, some pieces marked with a single, imperfect line of golden yellow. His only other color digression: rare shots of electric blue.

Typically, Ackermann integrates precision tailoring with fluidity, sometimes in graceful dresses and robes, and others, more complicated appendages that ebb and flow with the woman’s movement. Here, he virtually ignored flou, apparently inspired at least in part by his recent ascent as creative director of Berluti. With so much happening in men’s wear right now, he told WWD in January, “Something quite calm and silent might not be such a bad thing.”

Yet quiet is a relative concept, and should not be mistaken for reticence. Ackermann’s clothes befit women of substance — been there, done a whole lot, their depth of experience central to their allure.

Ackermann focused on a linear silhouette falling from a strong but varied shoulder — square, rounded, slightly puffed. Some looks were completely straightforward, their appeal in the clarity of line: notched-collar coat with flap pockets and a magnetic closure (or so it seemed); black turtleneck, sleeves pushed up over white shirt cuffs, and worn tucked into trousers; smoking, its upturned collar revealing white facings. When Ackermann decorated, it was with utter control, whether etching one of those yellow squiggles down one side of a peplum suit or adding a deep shoulder wrap to a black-and-white shirt worn over pants.

Ackermann’s most demonstrative move was to use uncut Mongolian lamb for wide, fluffy pants under a chic coat and voluptuous ribbed sweater. This made for an injection of the signature movement usually created via flowy silks. While it may read like a runway trick, it looked fabulous, commanding attention in a not-so-quiet way.