A designer with too many ideas beats the reverse situation. 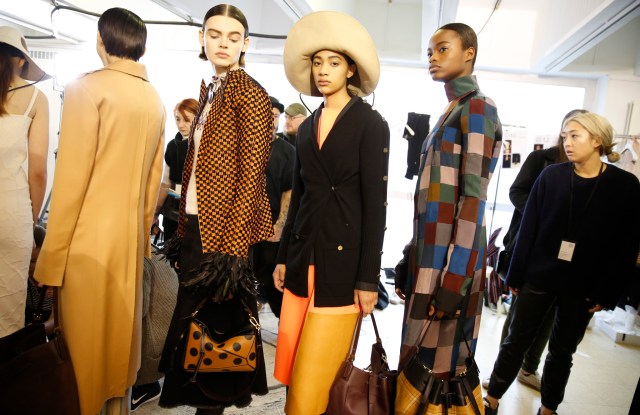 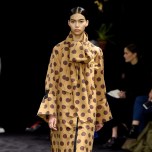 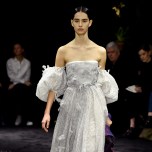 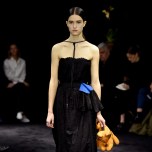 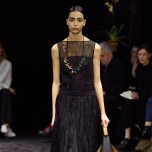 The Lord said, “Let there be light.” And Jonathan Anderson said, “Nah, I’ve got a better idea. Let guests arriving to the Loewe show grope around in darkness, feeling and phone-lighting their way around zigzagging aisles, then retrace their steps, having been misdirected by adorable, underinformed ushers.” Which begs the question: Why? It’s equal parts silly and pretentious, not to mention dangerous, and those guests not into the fun of it all (the vast majority is a good guess) were annoyed by the time they got to their seats.

Anderson had an abundance of other ideas. In fact, too many of them. His invitation included a little hanky embroidered with “You can’t take it with you,” a line with very specific, madcap connotations — or not, if you’re not into classic theater and movies. “A meditation on death — first thing in the morning,” one guest mused, upon reading the line repeated as the title of a little book of photographs by Lionel Wendt placed on each seat.

Backstage after the show, Anderson said he found the saying on something in a Miami antique shop, and thought it “very positive and very chilling at the same time.” He then went into a circular soliloquy about his inspiration. He liked the “idea of forcing a sensation” — he had the temperature dropped deliberately from 27 degrees Celsius to 15 (80.6 Fahrenheit to 59). He wanted to trigger “heightened emotion” while delivering drama and spinning a narrative around a woman passionate about collecting photography and orchids (numerous exotic potted plants were scattered about the room). And he wanted to work in some pretty black dresses. Got that?

One should tread carefully when calling out a designer for having too many ideas, because, the aforementioned Lord knows, it beats the reverse situation. While Anderson’s collection felt confused and directionless, many of its components impressed. If you tried hard, you could extract a mini theme or two. There were some lovely, soft dresses with artful asymmetric draping and interesting fabric mixes — aqua, taupe and white stripes against a dark jacquard; a black, high-neck dress with big puffed sleeves and deep godet insets of teal and royal blue. And there were checkerboards, though in so vast a range, it’s a reach to cite it as a theme: girlish ruffled trapeze sundress in pink and white ginghamlike checks (yes it’s fall, but there are no rules — you know that); alluring lean gown in big blocks of bronze and lilac; what looked like a leather jumper worked with huge, added-on rectangles of fur.

The abundance was laudable in that so much of it was so good, yet quizzical in that you had to wonder: Is Anderson merely overperforming in his fashion zeal or just unsure of where to go? It also played into a bigger question: absent a point of view, is it fashion?