Virgil Abloh embraced a more refined, grown-up sensibility and the fact that a lot of fashion is "nothing new." 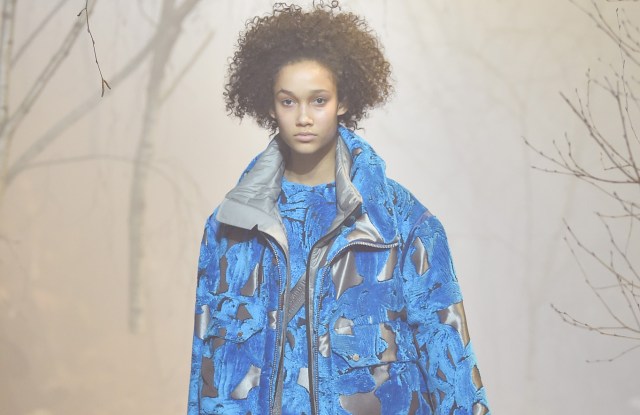 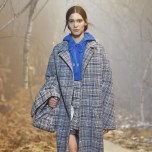 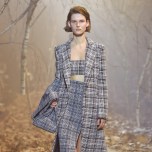 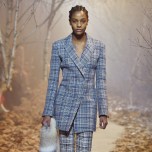 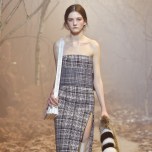 Virgil Abloh considered his fall collection to be a very important one for him, a turning point in his four-year-old label. “My brand feels like it’s starting from zero, which is great,” he said before the show. Reading between the lines, it felt like he’s eager to graduate from his streetwear designer/collaborator of Kanye West image.

Abloh is earnest, ambitious and still learning — all of which was reflected in the show. It was elaborately staged, set with smoky light, dried leaves and birch trees suspended from the ceiling, their barren branches swinging a little too close to some attendees’ eyes. The spooky forest added atmosphere, though it was unclear what it had to do with the collection. Abloh has many ideas yet, at times, struggles to connect the dots.

To that end, the clothes were a manifestation of his intense meditation on the phrase “Nothing New.” Backstage, Abloh unloaded a stream of consciousness-style analysis of the notion that fashion is driven by newness. “As creative critics, we all use ‘Is it new? Is it not?’ to define something, but usually it’s just a phrase,” he said. “An invention is what I think is something new.” Instead of striving to invent the fifth element of fashion, he gave himself permission to pursue something new for him and his girl,  “the 22/23 year-old-girl at the Mercer Hotel lobby that doesn’t get carded because she looks 28.”

If Abloh’s thoughts registered a bit naïve, the clothes were executed on a sophisticated level. He put more energy into developing a refined, grown-up look anchored in classically feminine shapes, such as the range of tailored plaid, vaguely Sixties jackets and lean pencil skirts that opened the show, and the diaphanous draped and layered blush and nude dresses that came later on. He backed off the obvious street and graphics vibe, slyly breaking up neat suits with hoodies, dressing up redone vintage Levis in nude tulle and crystals, and working his signature black-and-white stripe logo on the lapel of a purple fur coat and the tail of a fur stole.

The artist in Abloh might not want to hear this, but his mastery of branding was the collection’s distinguishing characteristic. Without the tiny Off-White logo stitched on lace shirts worn over lingerie slipdresses and the shiny, over-the-knee boots that read “Made for Walking” in white letters down the side, the clothes were attractive and well-done, but nothing new. But he already knew that.