The designer traded the lavish ballgowns that closed his show last season for a more grounded wardrobe rooted in daywear. 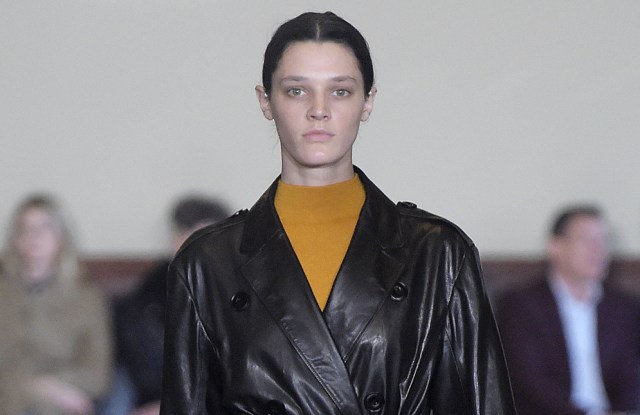 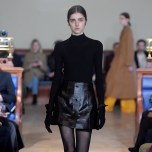 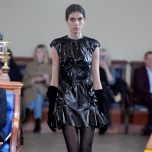 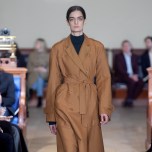 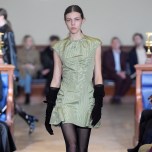 Olivier Theyskens switched his show location this season from a minimalist white gallery space to the Belle Époque splendor of Le Train Bleu, the soaring restaurant in the Gare de Lyon train station in Paris.

As if responding to some mysterious mathematical equation, he traded the lavish ballgowns that closed his show last season for a more grounded wardrobe rooted in daywear. “I did some drawings of them and I killed them early, actually. I wasn’t feeling it, because I wanted that girl to be, like, contrasting with this place,” he explained after the show.

The designer veered between short and long hemlines, alternating dresses with flippy miniskirts with belted maxi trenchcoats worn with extra-wide pants that swallowed the feet. A form-fitting tartan-patterned sweater dress, layered over a filmy floor-length skirt, suggested a compromise approach.

Meanwhile, a mustard yellow moiré priest coat was toned down with raw-hemmed blue jeans. “Some of the pieces that I felt slightly opulent, I wanted to counterbalance them in the way a girl would wear them. I felt it was appropriate,” Theyskens explained.

That didn’t mean he skimped on glamour. There were his signature bias-cut gowns, including a sleeveless one in forest green satin, and Victorian-inspired silhouettes, including a tiered black dress accessorized with tartan and patent leather pointed boots — think Eva Green in “Penny Dreadful.”

Some of the looks, like a black satin button-up sleeveless dress, could be traced all the way back to his debut in 1998, when Madonna wore one of his black satin coatdresses to the Academy Awards, propelling the then-unknown designer onto the international stage.

Since then, Theyskens has served as creative director of Rochas, Nina Ricci and Theory, before reviving his eponymous brand. After a soft debut last season, he is presenting the line to retailers, though it felt like he was still searching for a fashion sweet spot to call home.