As she marks 20 years in business, Reem Acra is trying new things: showing in Paris and shifting her focus to daywear. 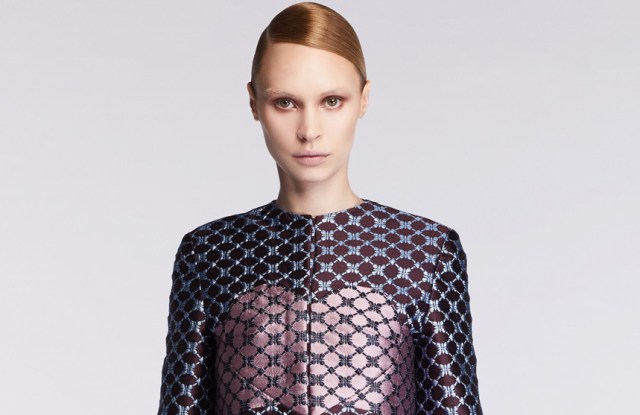 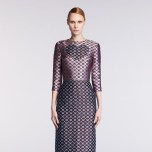 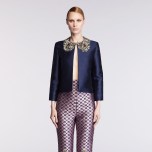 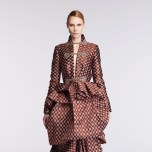 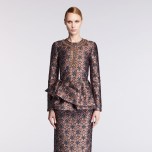 It’s a new day at Reem Acra, emphasis on the word “day.” As Acra celebrates her label’s 20th anniversary, she’s looking ahead, trying new things. She showed her fall collection in Paris as opposed to New York, booking a salon at the Ritz for a daylong presentation where the room was filled with forms modeling an ornate selection of Acra’s separates, which is increasingly becoming her focus. Eveningwear, long the core of the collection, was on racks to the side.

She dug into the opulent, old world side of her ethos, with rich jacquards in ottoman patterns on neat dresses — long sleeves, pencil skirts — with removable puffed peplums. Some were embroidered with heart motifs across the chest or decorative Hand of Fatima closures. There were bubble caftans, a heart-embroidered sweatshirt with a gently ruffled floral jacquard skirt, and zip-up grand baseball jacket embroidered with hearts and Hamsas. “I think it’s a mix of European and American,” said Acra.

As a total look, it is only for those seeking intense ornamentation. But that’s not really Acra’s intention. She sees the future of her collection as separates — wear an embroidered top with a pair of jeans, go to the office. It’s the modern way. It’s very recently that Acra moved in this direction. “I made the decision after talking to many people — the press office, retailers — they all wanted daywear,” said Acra. “There are clients out there who want to wear Reem Acra but not everybody is going to events. So we listened.”