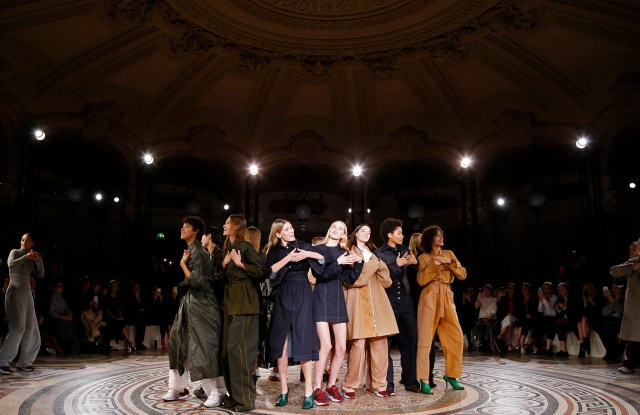 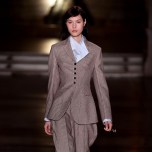 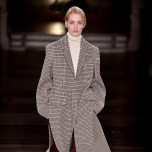 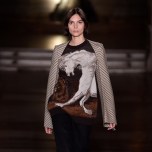 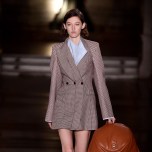 In this loaded cultural moment, Stella McCartney came out, sartorial guns a-blazing. She accomplished very distinctly what has proven elusive for some other designers: articulating her social message through the clothes without slogans and without sacrificing an ounce of her signature practical chic.

“Faith and love inspire the collection,” McCartney said after the show. “I want to reflect the good in people within my work. My message is clear. I want to bring people together in what I do, and politics, of course, are part of that.”

While it’s risky business to attempt classification of what feminism looks like via clothes or lack thereof, McCartney made a demonstrative statement on womanpower by drawing from two very different sartorial motifs, along the way imbuing the clothes with a newfound daring.

As a designer, McCartney is neither artiste nor show-off; she approaches her work as a creative problem-solver, delivering wardrobe solutions for real women. So the juxtaposed bravado of equestrian-inspired tailoring and pointy-bra constructions startled. Both have clear archetypal connotations, the former all about self-assurance and control. The latter has its roots in the Fifties, not a banner era in terms of female emancipation, and carries with it the sexy-secretary stereotype. McCartney’s update, both under sweaters and in actual constructions, put the focus clearly on the breasts in a manner atypical today. (Nicki Minaj in a pasty at 10 a.m. looked more ordinary that Stella’s pretty pointers.) The point (sorry) resonated loud and clear: Women are sexual beings free to express their sexuality as they wish. They are also powerful, opinionated and strong, the two facts not a contradiction but a single, fused reality.

Many of those women love great clothes, an essential fact of which McCartney never lost sight. She served them up with impressive tailoring, whether a great, loose-fitting coat or comfortably curvy coatdress in a natty British check. On a softer note: languid onesies with those bra constructions. McCartney went more casual with tomboyish paper bag overalls and a sweater sporting her animal motif du jour, a glorious pictorial of “A Horse Frightened by a Lion,” by the 18th-century painter George Stubbs.

For the finale, the models engaged in joyful dance, half of them chanting along with the soundtrack, “Faith! Love!” (mixed from George Michael’s “Faith” and the Beatles’ “All You Need Is Love”) and the other half, Princess Nokia’s less regal but pointed, “Don’t You Bleep With My Energy,” delivering the line with big, genuine smiles. Defiant optimism. It’s McCartney’s energy. Don’t bleep with it.