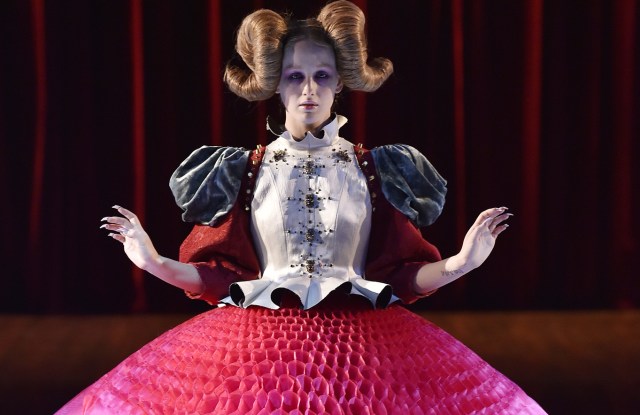 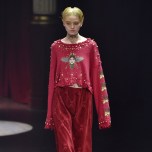 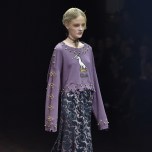 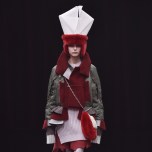 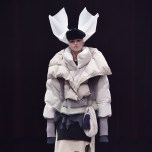 Hear ye, hear ye, designers trying to make a creative (or generic) political statement on the runway, or preach about ceremony and civilization, or say that it’s OK to design “nothing new” — Jun Takahashi just cleaned your clock with his fantasia of a fall show. To say that it was otherworldly would be making Takahashi’s point precisely. He titled it, “Utopie: But Beautiful III,” and staged what felt like a prodigious piece of escapist amateur theater illustrating a new race and society he imagined, each rank-and-file dressed ceremoniously to the nines.

He divided this fictional world into 10 orders — aristocracy, wardens, soldiers, young rebels, nomads, clergy, agitators, choir, new species and monarchy — each defined by their extraordinary fashion, yet all equal. “The ideal world would be that everybody’s equal, no different colors, no different anything,” he said. “Although there are queens and princesses, everybody is equal.”

There was a performance aspect to it, as each sect took the floor one at a time, some of them dancing and gesturing dreamily to the custom soundtrack by Thom Yorke. They were creatures, somewhere between human and insect, Takahashi explained. Aristocrats came in homespun chunky knits gowns, some moth eaten, some pulled, with colorful, elaborate honeycomb ruffs around their shoulders and winged masks. Wardens were plumed like birds in goofy knit onesies; a soldier in an army-green sweatshirt poncho was decorated in medals and had a single, fluffy black-and-white fur sleeve. There were patchwork crop tops and long, tapestry skirts for the rebels; layered puffer jackets strung with pouches for the nomads; exaggerated sporty bathrobes for the clergy; a wildly large-gauge, baby blue knit coat and belt strung with skeleton keys for the agitators; sculptural capes and tapestry gowns for the choir; tough leather for the new species and grand honeycomb ball skirts like life-size party decorations for the monarchy.

Strange and foreign though the characters were, they projected a warmth and familiarity, along with immense imagination. While obviously very different, there was a lot of common ground between them. Their costumes, wearable or not, looked crafty, handmade with love. Isn’t that the trend everyone wants in on?