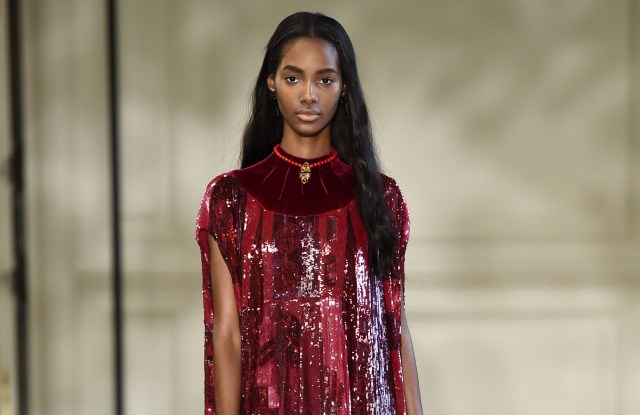 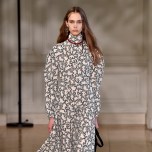 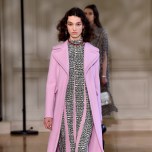 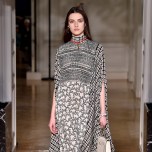 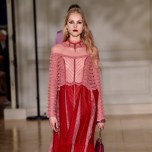 Valentino’s Pierpaolo Piccioli started his fall design process by posing to himself a question of a sort deep thinkers could mull forever: “What’s new today?” His answer: Nothing, really. Yet it’s fashion’s job to salvage that blunt reality by reimagining the not new into that which is gloriously so, which at its best awes and even inspires. As Piccioli concluded, “It’s new when you see things that you already know, and you connect them in a different way.”

That’s what Piccioli’s tenure at Valentino has been all about, first in concert with Maria Grazia Chiuri and now, on his own: He’s made us rethink romanticism as aspirational grail rather than reactionary folly, at least as much as such a thought can manifest in fashion.

Yet Piccioli understands the need for forward motion, and that, no matter how enticing the Valentino world of Renaissance-worthy damsels done up in exquisitely decorated silks, today’s women also have to dress for day, which he made the focus of his collection. To that end, he worked two disparate themes into a beautifully cohesive narrative: Victoriana and the Memphis design movement of the Eighties, the former for the depth of its romanticism, tinged with decadence; the latter, for its zest and democratic stance that art should be lived and not just looked at.

Memphis schmemphis. For all the inventive integration of the art movement’s vibrant colors and graphic symbolist imagery, Piccioli’s primary vision of day distills very directly from the otherworldliness of his eveningwear. Here, that meant a focus on dresses, chaste of silhouette, often with high neck and long sleeves, some cut below the knee, but many ankle-length, in airy silks that billowed with each step. They came completely plain, as a monastic (or was it mourning?) frock in black silk, printed or decorated, whether via delicate embroideries or intricate textural shenanigans. Often, these were shown under long, graceful coats, and they were gems. Two stunners: In dusty jade with a wide flap-placket open at the sides revealing a dress in the boisterous Memphis print; in black inset with tulle strips, over one of the collection’s few trousers.

Part of the wonder of Piccioli’s work is that it is, in its way subversive, as in counterintuitive to the norm. Put a diaphanous dream of a dress with an aggressive boot and you’ve grounded it for the runway moment, but it’s still a diaphanous dream of a dress. Will women embrace the idea as a viable look for day? Perhaps, if they’re open to rethinking old norms. How new is that?