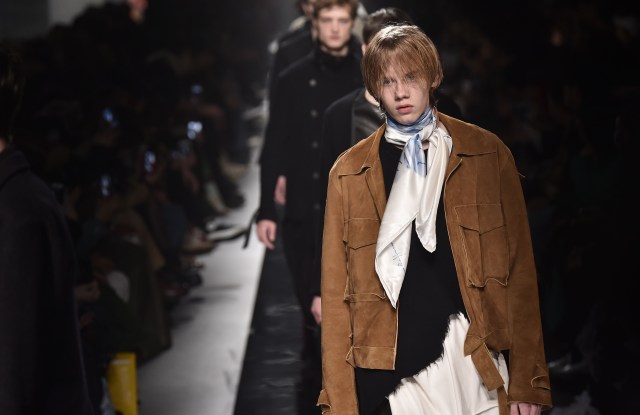 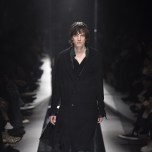 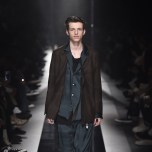 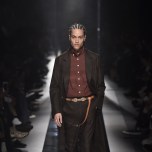 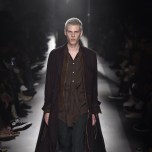 Shinpei Yamagishi’s goal for his fall collection was to think outside the box: How can one close the sleeves of a shirt without buttons? How can he make clothes more free and less constricting? To answer the first question, he used long, thin ribbons of fabric. For the second, he turned trousers into long skirts for men.

The designer said he purposely used mostly muted, solid colors — aside from a silky bright orange fabric and wine red and mustard yellow crushed velvet — preferring to focus on texture and detail rather than flashy graphics. He created a softer, more feminine version of men’s tailoring, which he mixed with knit sweaters, ponchos, motorcycle jackets, and coats that fastened at the hip with a single tab.

Subtle deconstruction was a running theme, showing up as frayed hems and jagged, almost ripped-looking sweater bottoms. Yamagishi’s signature layering put skirts over pants, added long scarves to several looks, and meant that often there were three or more pieces on top. But with delicate, light fabrics, the overall look was still smart and never bulky.