For his first runway collection the designer drew inspiration from Nineties themes such as grunge and raves, with a healthy dose of irony. 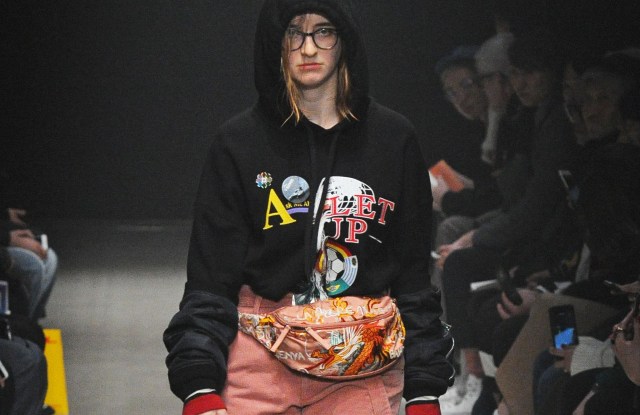 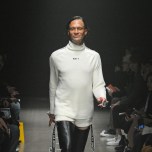 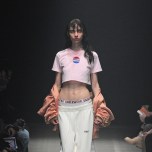 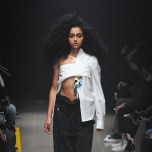 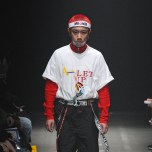 Masayuki Ino’s first runway show was one of the most highly anticipated of the Tokyo season, and not only because the designer himself hand-drew illustrations of some 200 invitees directly onto the invitation envelopes. For its authenticity, originality and humor, it did not disappoint.

Ino cast professional models and regular people in his show, wanting to put together as diverse a group as possible. He also aimed to show each person’s true self. A drag queen strutted down the runway in thigh-high heeled boots, ivory short shorts and a ribbed turtleneck sweater, and a heavier-set model wore baggy jeans, a stomach-bearing T-shirt, and layered denim and puffer jackets.

A Nineties rave was one of many elements that inspired Ino’s fall collection, with laser beams overhead and models that were sprayed down to look like they had just stepped off a crowded, sweaty dance floor. There were also collegiate influences, such as distorted riffs on university logos, and a grungy kind of sexiness, with thong underwear peeking out above the waistband of sweatpants, and thigh-high pant legs held up with garter belts.

One of Ino’s strengths is in finding an irony in the mundane. In addition to printing garments with words describing them (“underwear,” “knit”), he borrowed Nineties corporate logos from companies such as Caterpillar and Mobile and refashioned them to say NYC, Paris and Milan, poking subtle fun at the fashion world itself.