While some looks missed the mark, a series of dresses using wood as a fabric were striking in their rustic elegance. 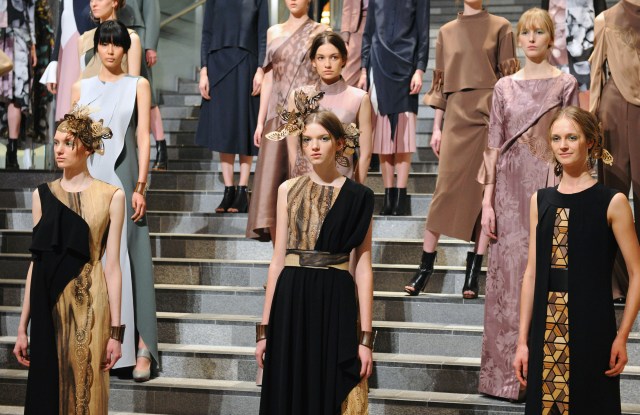 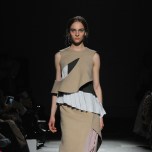 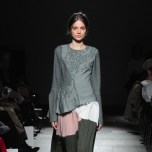 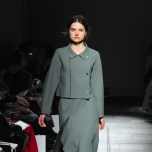 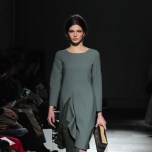 In his sixth season since being tapped to revamp the storied Hanae Mori house with the Manuscrit line, Yu Amatsu is still struggling to find the right balance between paying tribute to the past and appealing to a new, younger customer. While his fall collection included looks that fit both bills, the contrast between old and new was often too great, causing a disconnect and lack of cohesion at times.

Rather than designing around a particular inspiration, Amatsu went with a theme of combining different elements, such as colors and textures, this season. He used muted, smokey hues of camel, green, gray and brown on belted coats, ruffled tops and shift dresses. A photographic print of flower petals contrasted with black mesh on a long-sleeved frock, while a leopard print was splashed across the bottom of a puff-sleeved top and the front of dresses in two shades of gray.

A series of dresses in dusty rose satin missed the mark and ended up looking grandmotherly with their dated shapes and textures. But Amatsu saved his strongest work for last: beautiful, asymmetric dresses that used wood as a fabric. On one, black fabric cut away from the front to reveal a mosaic of wood pieces in three colors, fused to a fine black mesh. In another series, Amatsu used thin slices of wood like origami paper, cutting it to resemble lace and folding it into pleats. The result was a striking amalgamation of rustic elegance.