Michael Halpern continued his glitzy glamour for his fall collection. 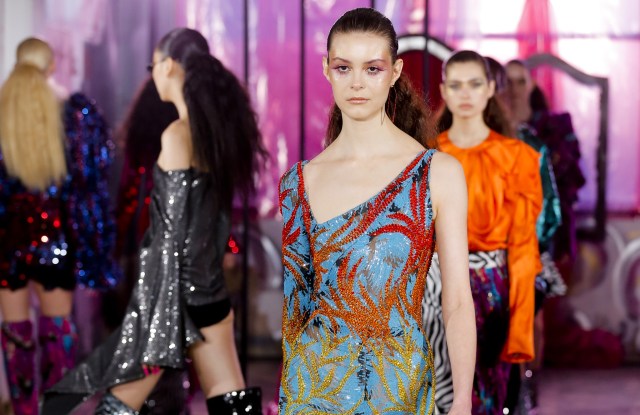 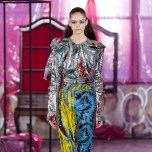 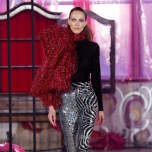 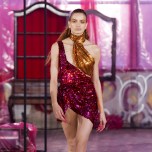 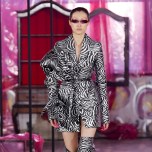 The party never seems to stop in Michael Halpern’s world. His maximalist sensibilities and love of sequins have propelled his brand, which is in its fourth season, into key retailers worldwide, including Bergdorf Goodman and Browns. Beyoncé is a fan, as are Adwoa Aboah and Marion Cotillard, who wore one of his gowns down the red carpet at the Cannes Film Festival last year.

This season, Halpern continued to build on his creations, tweaking his modern take on Seventies glamour with his body-hugging jumpsuits and exaggerated proportions in layered sequins. For fall, the New York-born designer drew on the late Nan Kempner, whose attitude toward fashion and dress codes was famously irreverent.

He wanted the Halpern woman to be a modern Kempner with a similar disregard for fashion etiquette. Halpern didn’t want his clothes to be restricted to eveningwear, so he blurred the lines. The London-based designer riffed on floor-grazing jumpsuits in different iterations — some featured plunging necklines, while others had asymmetrical necks and sleeves. Trousers were wide and featured clashing prints and jackets with dramatic shoulders were paired with micro minis. He kept the bustier from last season and evolved it into mini dresses worn with supersized Lurex scarves or subverted with a train over one hip. Halpern also created new silhouettes, including a metallic cocoon dress that fell sharply off one shoulder.

“I played with tailoring to introduce new silhouettes and challenge the idea of what is considered acceptable daywear,” he said after the show.