Up-and-comer Richard Quinn lived up to the hype stirred by Queen Elizabeth's attendance at his show, with a visual feast of color, print and volume. 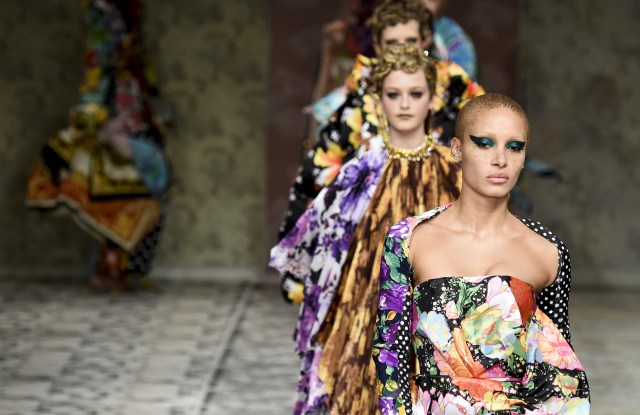 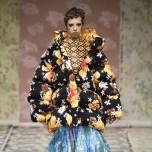 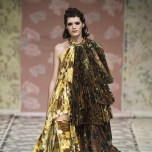 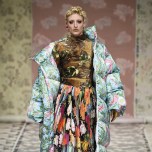 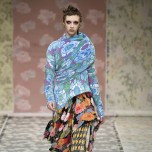 The stakes were high at Richard Quinn’s fall 2018 catwalk presentation. The up-and-coming designer showed his new collection to an audience that included the Queen of England, who was there to award him the inaugural Queen Elizabeth II Award for British Design, in recognition of his creative talent and contribution to the fashion community.

Even though he was only given a few days’ notice of the royal’s attendance, Quinn lived up to the expectations.

He maintained his focused vision, shining the spotlight on his impressive printwork and flair for standout, dramatic silhouettes.

An array of abstracted floral prints — all created in-house at the designer’s print studio in Peckham — were mashed up on loose halterneck dresses, delicately pleated chiffon skirts and oversize bomber jackets, to create a visual feast of color and pattern.

Quinn explored new territory, too, with a series of silk-satin layered pieces featuring spliced scarf prints that were paired with matching head scarves — a wink to the Queen’s style — and dramatic gowns done in metallic foil. Elsewhere, models in gigantic helmets made their way down the runway wearing tougher, biker-inspired jackets and slim pants featuring zips galore.

“I was thinking of old-school couture shows, the Muglers of the world. So you’ve got the motorbikes, the foil and the gowns mixed together,” the designer said after the show.

It was a wonderful concoction of references which highlighted Quinn’s far-reaching imagination.