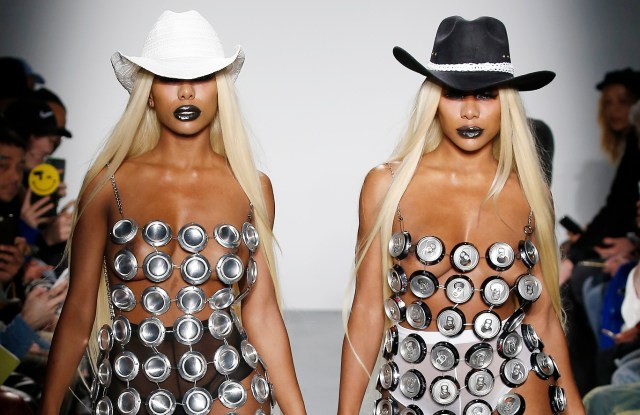 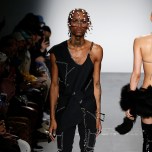 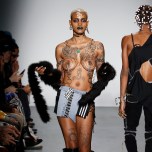 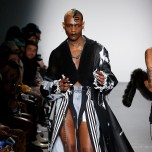 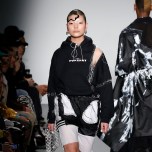 Absolute freedom, total creativity, uninhibited self-expression. It’s what you expect from designer Rio Uribe, and it’s what you got for fall. There were no guidelines to inform the distinctly off-kilter, homespun nature of the clothing, no qualms about censorship — hello, boobies! — or what’s appropriate for the runway. The designer is a champion for the disenfranchised. Here, he highlighted difference with audacious gender-unconcerned dress that had underground, street-leaning inclinations. For Uribe, weird was implicitly cool; normal, even. “It’s kind of the opposite of what’s happening in politics and the world in general,” he noted post-show.

Was it the most easily digestible collection? No, but the goal was to provoke, not to show pretty clothes; to note, his commercial offering includes the “perfect” versions of runway pieces. The authenticity in the diverse casting helped bring the message to life. I don’t know what the models were told backstage before the show, but I imagine it was something along the lines of “be yourself, strut your game.”

Now, the clothes. Uribe limited himself to a palette of black and white, pushing his design chops to work the colors in interesting ways. There were elements of deconstruction that drew from his first few collections, like blazers with topstitching and open panels, and hoodies held together with loose threads. He manipulated fabrics with a sense of distortion and drama, namely a billowy shirtdress comprised of multiple sleeves and a cutout knit top that maintained great structure. Most importantly, there was an undercurrent of subversive provocation. Perhaps the opening wire bra drew from his Nineties inspiration and Janet Jackson. Patchwork micro skirts and doilies accenting the crotch were more covered-up offerings, while new takes on chain mail came in the form of cut-up soda cans meant to allure. Powerful, charged and unrestrained, this was a collection that inspired.