The designer toned down his penchant for yardage in favor of highly covetable modern takes on tailoring. 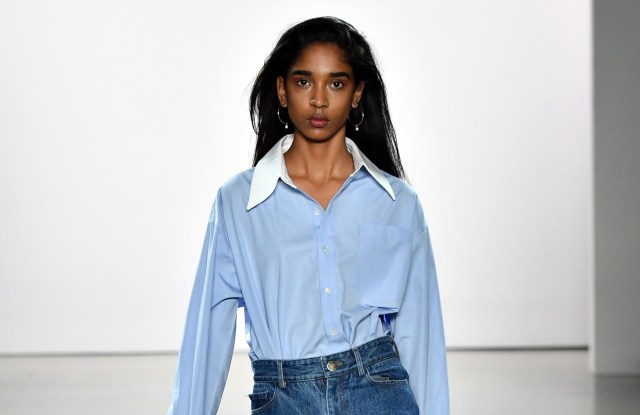 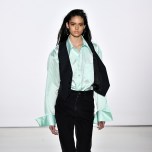 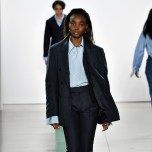 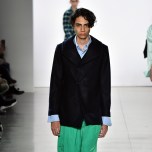 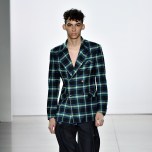 Emerging designer Matthew Adams Dolan is toning down his penchant for exaggerated yardage in favor of a more refined execution of sculpted silhouettes. He typically cuts fabric with abandon; for fall, he cut with intent and thoughtfulness, injecting volume without the lofty consumption. The result was a range of highly covetable workwear pieces that touched on classic American dress. In short, it was more mature.

Backstage following the show, Dolan noted a fascination with the juxtaposition between elitism and democracy which, to him, defines American culture and style. A dive into Jackie Kennedy’s sartorial history would certainly explain the level of restraint. The idea now was to provide the illusion of volume, not the actual production of it. He simultaneously curved big sleeves and nipped the waists of blazers cut in various plaids, men’s wear suiting fabrics and denim. A cape-like panel on the backs of jackets also appeared roomier styled with new slimmed down pants. Dolan was able to maintain a thread of casualness and youth by also examining Lo Life culture and Nineties activewear ads. The vibrant pinks and blues were subtle references to sportswear, seen on preppy cardigans and oversize shirting with shirttails peeking out from under skirts.

If the show underwhelmed in terms of proportions, it delighted with timeless pieces that will endure — even though he compromised on his more flamboyant design inclinations. As a young designer, it’s important to have a vision; it was refreshing to see a strategic approach to simplicity as well.