The designer's runway debut ignited a level of excitement in Paris not seen since the debut of Vetements in 2014. 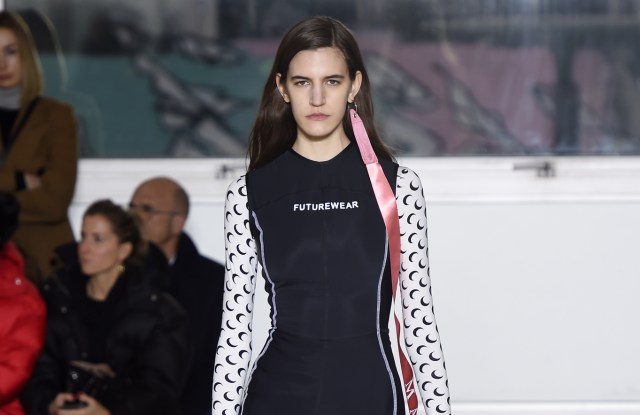 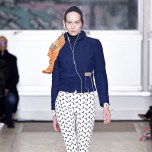 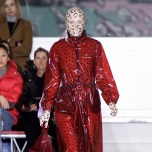 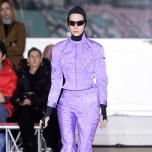 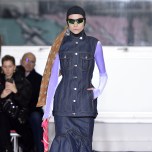 It’s been a heady six months for Marine Serre. Since winning the LVMH Prize for Young Designers last June, she’s quit her day job at Balenciaga and expanded the team behind her fledgling label. To say her runway debut was highly anticipated would be an understatement.

Among the guests who braved sub-zero temperatures to attend the show were Michèle Lamy, the wife and muse of Rick Owens, and Adrian Joffe of Comme des Garçons International and Dover Street Market.

Serre called the collection “Manic Soul Machine” and used the clothes to reflect on this point in the fashion cycle. “I think it means what I have lived these last six months and what probably fashion is today. So that’s it: Manic Soul Machine. We are all machines, right? I hope I keep my soul,” she said backstage.

Her signature crescent moon pattern, which has its roots in Islamic culture, appeared on flesh-colored balaclavas and catsuits. The masks covered the mouth like a niqab, but Serre shrugged off the symbolism. “It’s a winter collection so it’s cold today, no?” she offered.

She was more inclined to talk about her upcyling approach. Serre has stockpiled scarves and set up a system for producing her one-of-a-kind pieces, which included trompe-l’œil bra tops, patchwork dresses and a terrific handkerchief hem skirt worn with a black scuba top.

Her show notes touted the approach as “inventing fundamentally new solutions to produce garments today,” though that credit probably belongs to Martin Margiela (a show of his work at Palais Galliera, opening this week, includes a series of outfits made from second-hand scarves.)

Her passion and drive, however, are all her own and have ignited a level of excitement in Paris not seen since the debut of Vetements in 2014. Serre will have to balance the industry’s insatiable appetite for newness with her yearning for meaningful designs.