Ballet dancer Marie-Agnès Gillot and jewelry designer Noor Fares starred in the show, held at the American Cathedral in Paris. 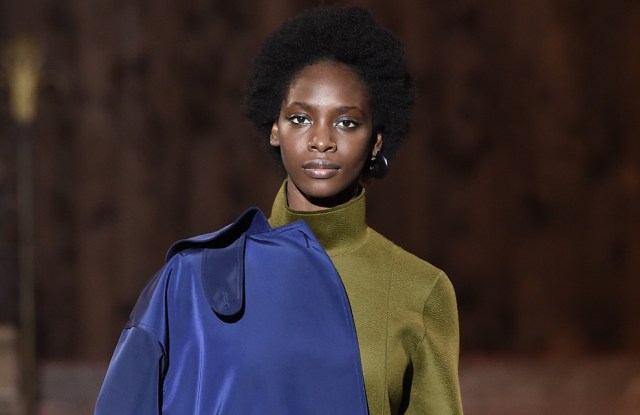 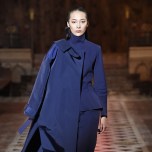 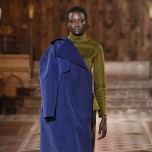 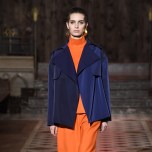 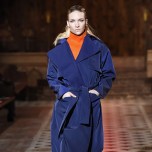 “It’s Couture Baby,” proclaimed a red neon sign overlooking the nave of the American Cathedral in Paris, where Rabih Kayrouz showed his fall collection. It was and it wasn’t, as the designer mixed one-off creations with ready-to-wear in his display, which blended softly tailored daywear with high-shine evening gowns.

Kayrouz likes to bring a performance element to his shows, which this season featured ballet dancer Marie-Agnès Gillot alongside jewelry designer Noor Fares — making a cameo appearance as the bride — and writer Sophie Fontanel.

Swathed in a navy mohair coat and orange felt dress, Gillot appeared several times during the show, sliding down the marble steps of the chancel and rolling on the marble floor. Her impassioned performance, which she kept up even as the designer was taking his bow, threatened at times to overshadow the clothes.

Because contrary to what his groovy sign may proclaim, Kayrouz is not a showman when it comes to designing. Working in a palette of navy, khaki, orange and white, he showed variations on trenchcoats, peplum tops and paneled dresses aimed at a confident woman who shrugs off trends.

After-dark options included a bustier gown in an iridescent fabric covered in nude tulle, and a sleeveless gold lamé dress with a neon-colored floral needlepoint pattern. It was couture, yes, but the kind you could picture wearing in real life.