Heavily pregnant while she was designing her fall 2019 collection, Alice Archer was drawn to the fecund symbolism in the work of Lucas Cranach. 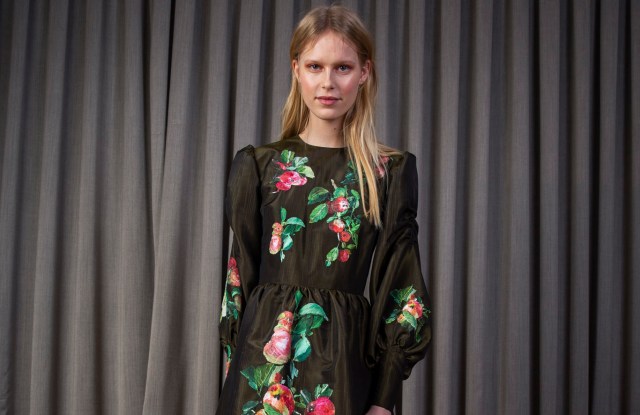 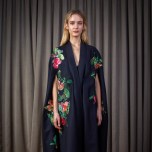 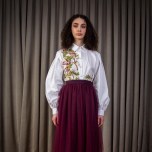 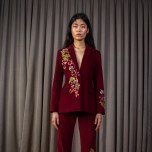 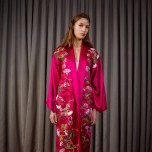 Alice Archer was heavily pregnant while she was designing her fall collection, which, she explained, was why she drew so heavily on the work of Lucas Cranach the Elder for inspiration. “I was very drawn to Cranach’s paintings, because they seemed to be about fertility, with lots of apples and cherubs and fleshiness,” she said, citing the fecund symbolism of “Cupid Complaining to Venus,” which is in London’s National Gallery, as her main reference point.

It was another pretty and romantic outing, with Archer flexing some muscle in her embroidery experiments, once again paying tribute to British flora. She translated archive images of medieval botanic woodcuts into luscious embroideries on simple silhouettes including a claret velvet gown, and an elegant black frock with fluted sleeves, starring the flowers of the snowball tree and hawthorn berries (as an aside, in folkloric tradition, the hawthorn tree was associated with Cardea, the Roman Goddess of marriage and childbirth).

Expanding on Cranach’s apple motif, Archer took to the orchards of Somerset with palette and brushes to do up a few oil paintings of apples, which were printed over white embroidered apples on an olive green satin dress, giving the effect of fruit popping off the cloth.

Some silhouettes echoed Cranach’s period, such as the fluted or blouson sleeves, the simple V-necklines and dipped waistlines.