Where recent seasons' collections were built around "The Joy of Sex," and frustrated housewives, Kane used this one to explore fetish materials. 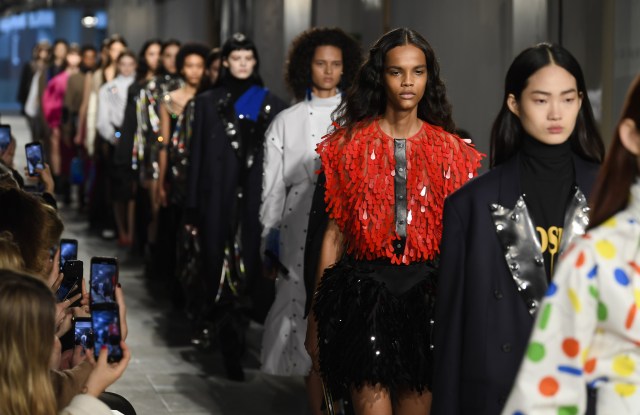 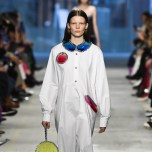 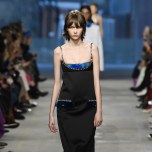 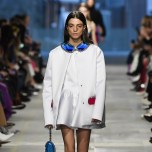 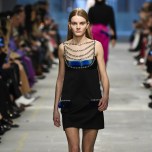 Cupcakes and rhinestones and rubber and oil; Christopher Kane worked some old — and new — things into this peppy collection that winked to certain “human obsessions” and channeled the designer’s sense of humor and study of the human form. Kane, who works with his sister Tammy Kane, described the collection as twisted, “but that is what I think we do well. We always do sexy very differently [than] anyone else, we do that undertone because we are both pretty weird.”

Where recent collections were built around “The Joy of Sex” or frustrated housewives, Kane used this one to explore obscure fetishes. There were T-shirts featuring long glove graphics and words like “Rubberist,” or knits festooned with bright balloons and the word “Looner.” Abstract prints, meant to resemble swirling drops of oil, spilled over miniskirts and boiler suits, while colored, transparent plastic made for collars and pocket flaps on clinical white shirtdresses, short coats and long cardigans.

Although jarring, those kinky winks didn’t overshadow the impressive lineup of Kane signatures, including the rhinestones lined up on the straps of silk minidresses or the edges of long cardigans; the silvery, Space-Age fabric for dresses, and those short, cupcake skirts with their bouncy crinolines. Lace appeared on the billowing sleeves of a short black dress, on the deep-V bodice of a cupcake dress and as the layers of a cupcake skirt.

New to Kane’s repertoire was a wrapping-paper-inspired balloon print on a long silky dress and a showstopper of a long black coat with a thick navy ruffle at the bottom. No weirdness here.