David Koma took the grandeur and romance of Shakespeare's Elizabethan era and translated it into his dynamic, modernist world. 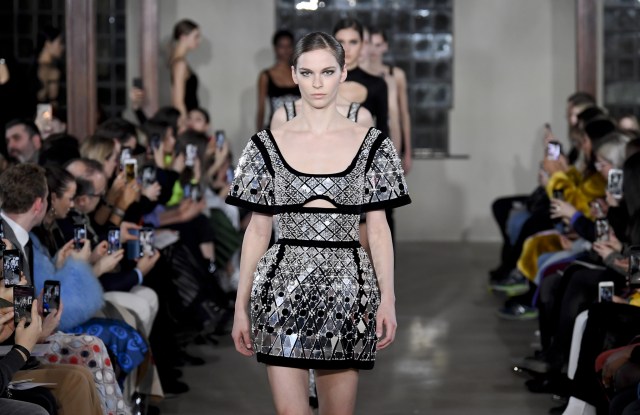 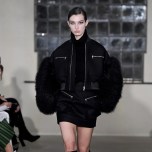 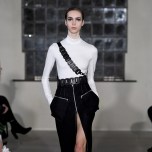 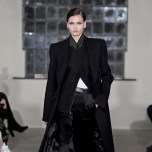 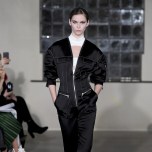 David Koma took the grandeur and romance of Shakespeare’s Elizabethan era and translated it into his dynamic, modernist world. He was equally inspired by the vigor of masculine dress codes, as well as by the opulent feminine dresses dating back to the Renaissance.

He brought the two worlds together with a strong daywear lineup in the first part of the show that featured leather trousers and dresses with large cargo pockets; outerwear with voluminous shearling hoods and sleeves; military-inspired leather accessories, and corseted tops or jumpsuits with more feminine bodice boning at the waist.

The idea was to meld masculine and feminine, old and new — that’s why a series of chic skirts or fitted dresses with thigh-high slits were made using old-school bouclé fabrics that were coated to achieve a more modern, high-shine effect.

Although Koma is best known for his sexy feminine dress and standout eveningwear, the daywear offer here proved that he can flex his muscles far beyond his niche.

When it came to eveningwear, he remained focused on signature silhouettes, such as sharp-shouldered mini dresses, or asymmetric cuts that flatter the female body in a way that’s hard to come by.

They came heavily embellished with geometric plexi beads, textured tulle or three-dimensional macramé lace. Among the standouts was a series of sharp-shouldered minidresses done in regal navy velvet and embellished with crystals in the shapes of butterflies and snakes — a nod to references in “King Lear” and “Macbeth.”

“The narrative in Shakespeare embraces power and regalness. I wanted to communicate the same sense of confidence in this collection,” said the designer backstage.