Bovan has been making big — multicolored — waves in London, with his larger-than-life designs bolstered by crinolines, his wacky headwear and lots of draped, textured or cutout knitwear. 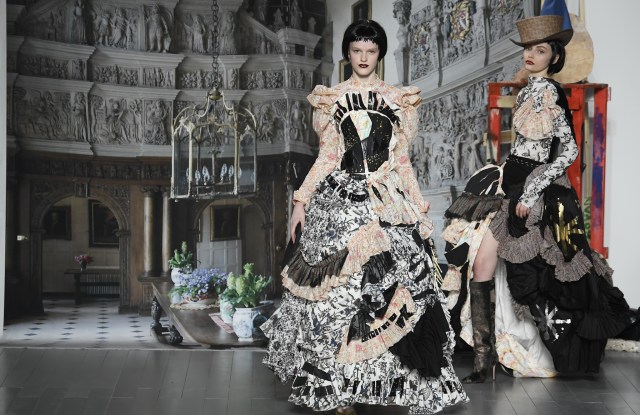 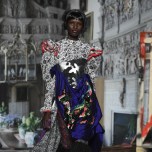 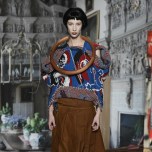 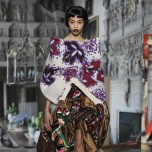 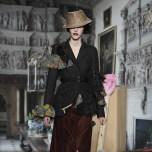 Matty Bovan was feeling England in his bones with this romp of a collection, which showcased swathes of Liberty fabrics, homemade crochet roses, nods to the 17th-century Pendle witch trials and to the grand Burton Agnes Hall, a stately home in the designer’s native Yorkshire. Bovan has been making big multicolored waves in London with his larger-than-life designs bolstered by crinolines, his wacky headwear and lots of draped, textured or cutout knits.

For fall, thick lasagna ruffles rippled over the shoulders of tailored jackets and peplum tops, while half-and-half shirts with billowing sleeves were made from a mix of paisley and swimming fish prints. Crinolines galore bounced joyfully under big skirts made from big sweeps of lavish fabrics that were ruffled, printed or satiny. Other dresses were covered in gigantic crochet flowers, leaves and organic shapes, while blankets and furs were cut and draped and ladled over skirts. Knits practically vibrated with surreal UFO, pig, flower, crest and horse intarsias.

“For me, it’s an ode to England,” said Bovan, who is based outside York, and who touted his use of local wool, his work with artisans, and collaborations with the likes of Liberty, Stephen Jones on hats and Katie Hillier on key rings, scrunchies and bows. And what a tribute it was — a wild-eyed, big-hearted hug for a country that’s feeling a little battered ahead of its exit from the European Union.