If you're buying less, you could do worse than buy Westwood. 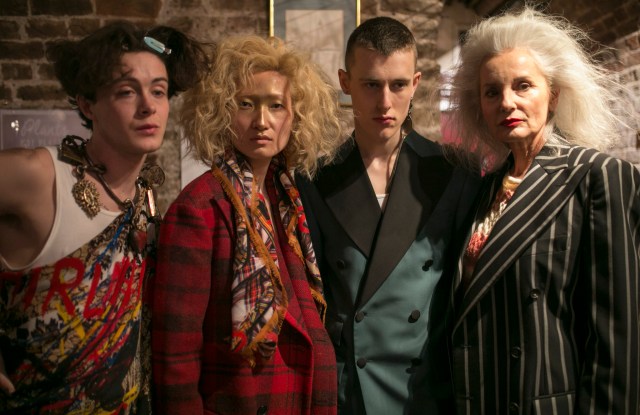 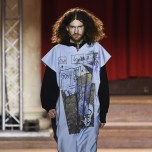 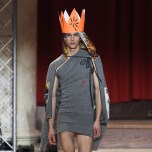 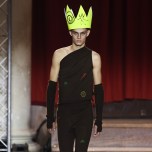 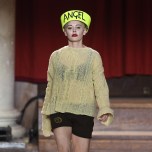 Vivienne Westwood staged her show at a former church in Westminster that operates as a concert hall for classical music performances. It was a suitably dramatic backdrop for Westwood’s fall collection-cum-manifesto, which came laden with messages.

In a number of sombre tableaux that punctuated the show, the assembled cast of activists including Rose McGowan, Camilla Rutherford and Sara Stockbridge spoke about a number of issues, including inequitable taxation, democracy, consumption (it’s “the enemy of culture”), ignorance and truth, with Pinocchio (personified by a model, complete with prominent beak) held up as a cautionary tale. Top of them all: climate change, with the overarching missive to “Buy less, choose well, make it last.”

“I bought this coat last year, it’s called the Prince Coat; it’s a classic,” announced model and activist Hugo Hamlet, proudly gesturing to his oversized checked topper which, in truth, was from the fall 2018 collection, one of Westwood’s favorite styles; she repeats it every season. Fair enough; it’s a nice coat.

The sustainability conversation is, at last, taking hold in fashion, with designers seeking ethical means to produce their wares without sacrificing on aesthetics. Westwood has bravely led the vanguard on the movement. But being preached to in a manner that was more off-Broadway awkward than galvanizing was jarring and, at times, sanctimonious. Exhorting the audience to buy less, trotting out the executive director of Greenpeace to weigh in, then showing a collection which, presumably, she hopes will sell felt disingenuous.

That said, if you’re buying less, you could do worse than buy Westwood. For the gents, tailoring hits included a wide-lapeled, micro-check three-piece suit worn, and a narrow suit done out in bold pinstripes.

Highlights among the women’s offering included a bosom-hoisting corset and matching leggings, topped with a corporate-striped shirt, a lovely olive wool cape, and an oyster satin slipdress teamed with a cropped fluffy gray coat with chunky neck tie, and a navy sweatshirt emblazoned with the ace of spades captioned with “Motherf***er.”