With his fall collection, Paul Surridge succeeded in finding a balance between the brand's strong heritage and his personal modern vision. 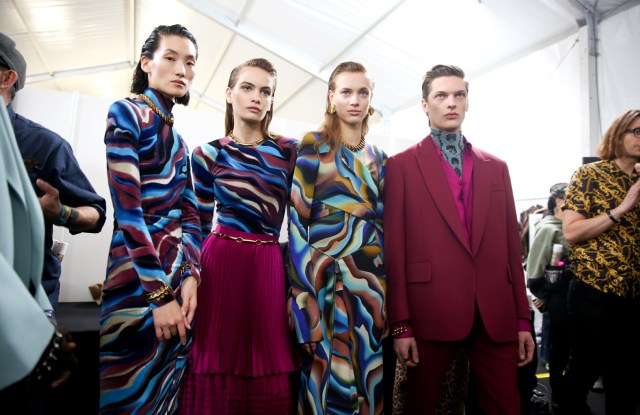 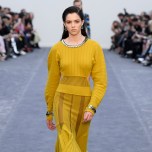 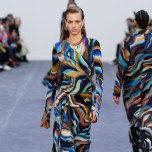 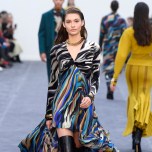 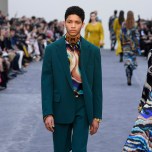 Since arriving at Roberto Cavalli two years ago, Paul Surridge has pinged between a more timid take on the house’s demonstrative style, and full-throttle indulgence in the sexy opulence associated with the Florentine house, employing an overabundance of exotic skins and exposed skin. Last season, he embraced the cycling shorts trend — hopefully, already forgotten — and a weird eclecticism, which didn’t convince. Now he seems to be finding his footing.

On Saturday, Surridge showed a promising collection that was respectful of the Roberto Cavalli DNA and true to the designer’s understandable desire for both modernity and self-expression.

He worked tiger prints — among animal emblems of the house — in unconventional, bright color combinations and splashed them across a range of designs, from the opening sartorial double-breasted coat to a bias-cut wrap dress slithering with zippered details. The same motifs also appeared on a bi-level frock, as an intarsia for a fur coat and via micro beads on a short, strapless dress worn with a second-skin turtleneck sweater.

A sense of lightness was introduced via a range of silk pretty pleated skirts and frocks, including a halter-neck style in strawberry red with a foulard-like detail at the bodice,. Knitwear sported flattering ergonomic cuts and leather added toughness to the lineup with black trenchcoats and suits available for both women and men. For these latter, Surridge proposed softly constructed tailoring — sometimes enriched with a touch of sparkle — which was juxtaposed with streetwear-inspired ensembles for men, including oversize puffers, as well as printed parkas and bomber jackets.

Coming back to women’s wear, the designer didn’t forget the red carpet and conscripted the brand’s skilled fashion artisans to create pretty evening designs, such as a V-neck, high-waisted long dress showing volume at the sleeves and a graphic allover decor of metallic applications, or a sheer frock with sensual laser cutouts.