Hilary from "The Fresh Price of Bel-Air" and what she would be wearing now, quipped LaQuan Smith about the inspiration for his fall show. 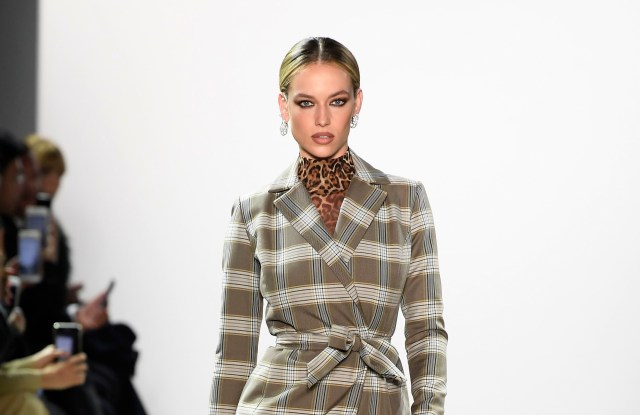 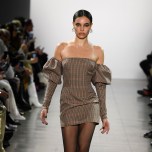 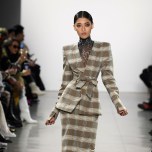 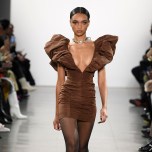 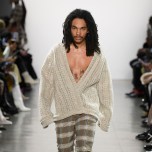 Hilary from “The Fresh Prince of Bel-Air” and what would she be wearing now, quipped designer LaQuan Smith backstage about the iconic pop culture reference that shaped his fall collection.

The show aired in the Nineties but it was the decadent Eighties that Smith, whose own brand of sexy is about over-the-top glam and powerful women, really landed in. “I wanted everything to be sexy and expensive, I wanted her to be super strong and super confident. I didn’t want to shy away from it this season.”

Smith’s sense of opulence meant that classic materials — wools, corduroy, leathers — were turned out into strong, often body-con silhouettes, including leopard body suits, short plaid dresses and gowns with slits cut sky-high. A collaboration with Saga Furs injected another layer of grandiosity, such as a fire engine red bolero jacket; fur also made its way onto many pieces with accents and embellishments. There was also one look that was just a fur coat, stockings and a pair of Manolo Blahniks. Smith collaborated with the shoe brand, using four of the sexiest classic Manolos — the Prishipla, Chaos, BB and BB Strap.

Smith filled out his collection with options for day, too. “I had to grow up a bit in terms of the offering, understanding my client and giving her daywear separates,” he said. He did it with trenchcoats, pencil skirts and knits.

Smith is a designer who knows his point of view and dives into it unabashedly. His client loves it, as shown by the crowd who bopped and cheered to the runway soundtrack — a remix of “The Jeffersons” theme song anyone?