The designer's dramatic, lyrical fall show, which had a couture quality to it, was a haunting dialogue between intimacy and distance. 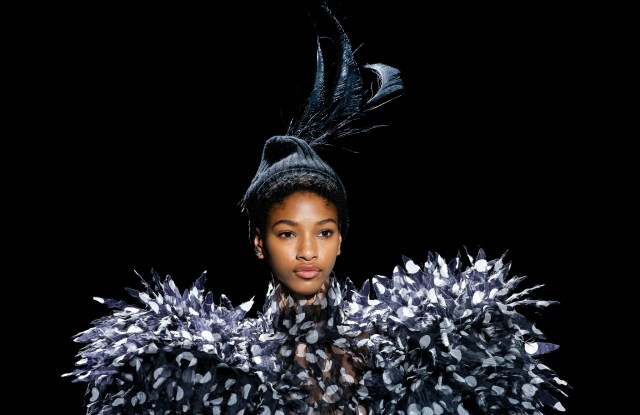 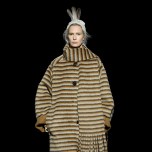 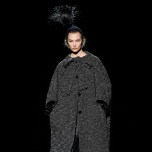 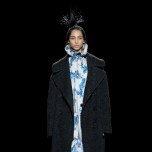 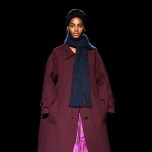 “You have to come to New York to see a private couture show.”

That observation came from no less an aficionado of the haute genre than Sidney Toledano. Surely the couture notion crossed some other minds of those exiting the Marc Jacobs show on Wednesday night after what was a dazzling display of fashion.

Jacobs scaled everything back but the fashion impact. He showed 40 looks, fewer than his typical 60-plus, to an audience far smaller than usual. Yet he kept the show at the vast Park Avenue Armory, where he installed a reflective black glass floor and hired the American Contemporary Music Ensemble to perform live. He positioned the quartet off in a corner, far from the runway but well-lit and very much in view as the models proceeded out, each commanding the space solo and exiting fully before the next girl emerged. It all coalesced into a haunting dialogue between intimacy and distance.

The clothes were exquisite. “Each [look] will be an exaggeration of our view of who each of the women is,” Jacobs said during a preview. “For lack of a better word, it’s like a cabine of women we love.” Perhaps the most loved: Christy Turlington Burns, who last walked the runway in the Nineties. She closed the show, a breathtaking swan in black feathers and petals.

Jacobs talked about the consideration that went into his design process. “We’re always attentive,” he said. “But this is super-considered, every single aspect, with a lot of beauty and joy. But in our way, which is not giddy this time. It’s that kind of Violet [Incredible, fall 2005] or cardboard box [fall 2010] idea or whatever. Without going backward. But certainly that fallen-angel kind of beauty. But still an angel.”

Indeed, the models seemed to exist in that place where joy meets wistfulness. Their clothes were done up, often to the point of flamboyance, yet their demeanor was of intriguing restraint.

To Jacobs’ point, each look was unique within the highly focused lineup. In a follow-up to spring, full volumes prevailed, now deflated to varying degrees. Many looks referenced Jacobs’ archives — the warp-print trapeze dresses; an austere schoolgirl sweater and skirt. The coats and capes were beyond, from sturdy solids and windowpanes to a feathered masterpiece, some nodding toward Balenciaga (Cristóbal), and some, the Salvation Army. The fabrics telegraphed high luxury: luxe cashmeres and wools; an allover sequined glen plaid; airy organza petals, made into dreamlike dresses. As for the millinery — feathered wonders by Stephen Jones, each starting with a humble knitted grunge beanie.

It was all dramatic and lyrical, while achieving Jacobs’ goal of exaggerated reality — a heavenly take on it, anyway. Fallen angels, ascendant.